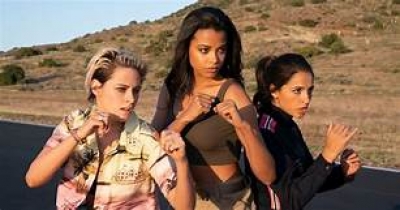 What can I say I grew up with the original Charlie’s Angels, Farrah Fawcett, Kate Jackson and Jaclyn Smith and after Fawcett left Cheryl Ladd came on board. I loved the series and never missed an episode and later in life had the pleasure of spending time in Hawaii with Cheryl, her husband and their daughter Jordan. You can’t do better than the beauty of an angel and this new film doesn’t miss a beat.

The story opens in Rio de Janeiro with Sabrina Wilson (Kristen Stewart) and Jane Kano (Ella Balinska) on a secret case against Jonny Smith (Chris Pang). One year later, we find Edgar Bosley (Djimon Hounsou) and the women in Hamburg on a stake out where they meet with Elena Houghlin (Naomi Scott) who works for Alexander Brock (Sam Claflin) the creator of the Calist O which is a device that can help light the way of the new world but in the wrong hands could turn into a very deadly weapon.

The Townsend Agency has expanded with companies all over the world, each with their own Bosley and natural health aid like Saint (Luis Gerardo Mendez) all still run by the voice of Charlie. From Los Angeles, to Paris, London and Istanbul the women are on this case of someone trying to steal access to the Calist O and Bosley (Elizabeth Banks) has taken over helping the two Angels with Elena because the original John Bosley (Patrick Stewart) has retired. There are many twists and turns ahead as the Angels and Bosley along with Elena fight the criminals and the assassin Hodak (Jonathan Tucker) to keep the Calist O device from falling into the wrong hands.

I enjoyed this film quite a bit. Banks does a great job as director and writer swiftly explaining the new Townsend business setup in turn showing the original Angels and the ones thereafter even with a cameo by Smith. A great score and music along with brutal fights, car chases, explosions and more it isn’t over-done but rather tamed down from the last Angels films to bring back some of the nostalgia. That along with a well-developed script helps although the main plot was slightly weak and a bit under-developed.

Stewart renewed her fate in my eyes as she does a great job here bringing fierce gaiety and humor to her part. Scott also brings a sense of surprise and levity to her character while Balinska is protective and strong. Banks is spectacular wearing three hats in the film of which she never does any wrong. Patrick Stewart is quite a surprise, Hounsou is short lived, Claflin, Tucker, Faxon, Pang and Mendez all chip in as huge supporting characters that keep this ball rolling right to the end. I really believe Banks has resurrected the Angels and will keep the franchise alive deservedly so. There are some race horses in the film that are absolutely beautiful.

More in this category: « Last Christmas Ford V Ferrari »
back to top

We have 380 guests and no members online