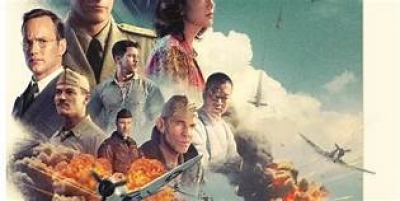 Lieutenant Commander Edwin Layton (Patrick Wilson) and several other military brass have met with Admiral Chuichi Nagumo (Jun Kunimura) and several of his members in the Japanese army over a sparse dinner and drinks. Layton knew something was up but just could not place exactly what the Admiral was thinking but upon his leaving expressed that the USA was not looking for war. Four years later on December 7, 1941 the Japanese attacked Pearl Harbor killing a large number of unsuspecting military personnel like Lieutenant Roy Pearce (Alexander Ludwig) and sinking several of the American ships in the harbor.

Japan invaded the Chinese already and the USA stayed neutral but now Japan knows they have awakened a sleeping giant by attacking the USA. Funerals were taking place every day to bury the brave soldiers killed by the Japanese attack but in February 1942 the US attacked the Marshall Islands as the first mission to retaliate against the Japanese country for killing US soldiers leaving children without fathers and wives without husbands. Several well-known soldiers in the battle against Japan have stepped forward in the path of harm, Admiral Chester Nimitz (Woody Harrelson) made the final decisions on the plan of attack with help from Layton and his Intel crew. Vice Admiral William ‘Bull’ Halsey (Dennis Quaid) was in charge of the fleet with Admiral Raymond Spruance (Jake Weber) who took control for the battle of Midway.

Lieutenant Dick Best (Ed Skrein) was well known for his off the wall flying but he always got the job done and worked aside Lieutenant Commander Wade McCluskey (Luke Evans) with Eugene Lindsey (Darren Criss) and Jimmy Doolittle (Aaron Eckhart) along with Cryptographer Joseph Rochefort (Brennan Brown), Chief Aviation Radioman James Murray (Keean Johnson) and Aviation Machinist Bruno Gaido (Nick Jonas). There were some very young American military men that were tired and fearful but when it came to the fight they willingly gave their lives for the death of their friends and the safety of the American people. On April 19, 1942 the USA bombed Tokyo and on May 8, 1942 the Corral Sea was bombed by Japan and on May 28, 1942 the Midway Islands but this time the USA was ready and on June 4, 1942 fighters were in the air again but on September 2, 1945 Japan surrendered.

I really enjoyed this film especially while sitting with a number of our USA military from our own military base here in Tampa, Florida. The opening scenes of Pearl Harbor under attack were a visual masterpiece on the big screen but heart wrenching to see knowing that so many people lost their lives that day. So at times I appreciated the cinematography in the film along with the incredible score and sound effects and I thought the writing was sufficient as it tells the true story of Midway unlike other films that sensationalized the true events for romance. This rendition is honest and very truthful in its representation but I thought since the movie is called “Midway” we would see more of the titles war but it seemed to somewhat skip on by mostly.

The cast department did a great job here although I wonder if by having young heart-throbs Nick Jonas and Darren Criss in such a serious film is too much of risk due to their well-known artistry in the music world. The rest of the cast are superb and did well in their roles like Mandy Moore but I did notice sometimes the actors accents would come and go. Skrein grows up mentally in the story and Quaid who at times seemed over dramatic help to control the plot but it is all the actors around them and the supporting roles that help make this more of a true to life story more realistic then over dramatized. No animals that I saw in this film but there is a large well-known group of cast members that help keep the story moving along.