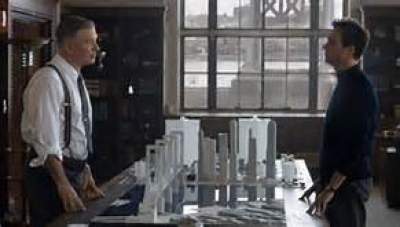 Warner Bros. Pictures, Class 5 Films and MWM Studios present an R rated, 144 minute, Crime, Drama, directed by Edward Norton, screenplay by Norton and based on the novel by Jonathan Lethem with a theater release date of November 1, 2019.

Frank Minna (Bruce Willis) is married to Julia (Leslie Mann) and is the head investigator at L&L Agency in Brooklyn, New York. He works with Lionel Essrog (Edward Norton) who lives his life with his cat and suffers from Tourette’s, Gilbert Coney (Ethan Suplee) the driver, Danny Fanti (Dallas Roberts) and the know it all Tony Vermonte (Bobby Cannavale). Frank has always held a special affection for Lionel as did Lionel for Frank so when a meeting goes wrong and Frank ends up dead Lionel takes it upon himself to investigate who killed Frank and why.

On his lengthy journey to uncover the truth Lionel who shouts out at times but has a keen memory has found himself on a trail that is unexpected. In a whirlwind of drama Lionel is surrounded by a number of players, Gabby Horowitz (Cherry Jones) a protester against the latest land developing which is casting out all races other than white, her associate Laura Rose (Gugu Mbatha-Raw) the beautiful young woman that is more involved than she could ever imagine along with her father Billy (Robert Wisdom), Moses Randolph (Alec Baldwin) the builder and developer, think Donald Trump type personality, William Lieberman (Josh Pais) an associate of Moses that holds a secret, Paul (Willem Defoe) someone close yet disliked by Moses along with a number of other gangster-like tough men. All of these people hold a piece of the puzzle to why Frank was killed and as Lionel works to uncover the truth he discovers satisfaction won’t unburden a tortured life.

I loved the 1950’s type atmosphere that was presented quite well throughout the streets of Brooklyn and Harlem. The director and writer as well as leading man, Norton, brings to life a film that even felt like life in the distant past. I enjoyed the detail in the film along with his spotlight on the jazz club and Trumpet Man (Michael Kenneth Williams). At first I questioned his use of Tourette’s but I must say it added a sense of humor and levity to the film. I will say it could have been 20 minutes shorter but I think Norton as a director out of the box struggled with what to cut out from the story. I could have picked a few scenes that were of less importance but overall this is a mystery film that unravels to tell the truth in the end.

As I said Norton is awesome and a very likeable character unlike Baldwin who resembles that of Trump out for greed, ego, discrimination and money. Mbatha-Raw is not only gorgeous but with her looks, wardrobe and demeanor does a wonderful job as a strong woman out for change. Dafoe comes and goes but is truly a strong force in this role. Cannavale, Roberts and Suples make a great team of associates for Norton and Jones, Pais and Willis bring content and plot to the story. Overall this film runs a bit slow at times but it also contains intrigue to keep the audience guessing. I loved the moment with Norton and his cat a true companion.

More in this category: « Terminator: Dark Fate Doctor Sleep »
back to top

We have 422 guests and no members online