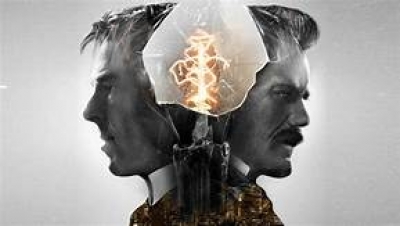 It amazes me how a film as such can be so well written and directed that it makes learning interesting on the big screen. On January 27, 1880 the journey for the invention of light has begun in taking people out of the dark and into brightness. Thomas Edison (Benedict Cumberbatch) is on the path of bringing light into homes, businesses and streets with the assistance of his wife Mary (Tuppence Middleton) who is raising their two children, Dash (Woody Norman) and Dot (Sophia Ally) and Thomas’s assistant Samuel Insull (Tom Holland) among others. Edison had an inventive mind able to come up with ideas worthy of bankers investments like that of J.P. Morgan (Matthew Macfadyen).

But along come George Westinghouse (Michael Shannon) and his wife Marguerite (Katherine Waterston) with his scientists and helpers to throw a wrench into Edison’s life with a bit of competition. In 1896 Westinghouse was accused by Edison of stealing his 15 years of research and work. It seems that migrant futurist Nikola Tesla (Nicholas Hoult) who once worked for Edison has taken a job with Westinghouse and is out to beat Edison. Many achievements and disasters have happened to both inventors as lies and deceit take over their lives not to forget the many animals that have lost their lives during tests using electricity. Once trying to light New York City and later in 1892 the Chicago World Fair the gloves are off and both men are moving forward to perfect the cost of electric while inventing new ideas like the phonograph. It seems in the world of fame once achieved it seems to outdo justice.

As the men try to outperform one another when it comes to a motor it is Tesla that finally stands a chance to come out from behind the curtain and into the known inventor’s world. Sometimes in reality devices work and sometimes they do not like the electric chair that worked on a horse but not as well on a murderer. In the end, the men are social while Edition creates motion pictures Westinghouse and Tesla were working with Niagara Falls.

I enjoyed the film and learned quite a bit but I’d probably have to watch it again to get somethings that passed me by. The film is nicely directed and more so written to not make it boring but with some liberties taken it comes across quite interesting and informational but not boring. Some great photography and sound along with some interesting situations that could play still in this day and age the film may not appeal to a younger group but an older group interested in a great intellectual story should see this film.

As for Holland I wasn’t sure that was “Spiderman” he looked quite different and proves he is talented beyond super-heroes. Cumberbatch is the main character and the main focus as he once again proves his worth on the big screen. Shannon proves to hold himself up well in all his scenes as does Hoult who may be the weakest of the four men I mention. The women, Waterston and Middleton are wonderful supports to their male leads as are all the other supporting actors. Sad though to hear of all the animals that lost their lives in order to achieve the lightbulb and use of electricity.

More in this category: « Black and Blue Pain & Glory »
back to top

We have 239 guests and no members online