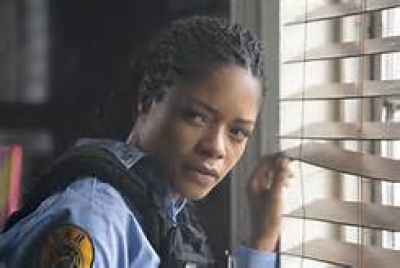 Alicia West (Naomie Harris) is a rookie on the New Orleans Police Department working the streets on a daily basis with her partner Kevin Jennings (Reid Scott). Alicia has one hell of a background serving two tours in the army and now as a protector of all people in New Orleans. She saw people for people not based on skin color, education, or way of life but rather for the ability to be a good citizen. She and Jennings were driving through Kingston Manor which is not known for good people but for West she states that in among the bad are some good.

At the end of her and Jennings day their boss came into the locker room and asked Jennings to work a double but he had tentative plans with his wife so West took the shift with a new partner officer Deacon Brown (James Moses Black) much to his surprise. During their shift Brown had some business to attend to in an old warehouse and instructed West to wait in the car but after shots fired she entered into the building and what she witnessed along with her body cam was an execution of a young black man, Zero (John Charles II). It just so happened that the young man who happened to be working with some crocked cops was the nephew of Darius (Mike Colter), the leader of a criminal world.

At this point West witnessed a crime by bad cops, as well as filmed it on her body cam. So the bad cops led by Terry Malone (Frank Gillo) are out to kill West and destroy her cam. On the run West turns to Milo ‘Mouse’ Jackson (Tyrese Gibson) who she met at his supermarket as well as an old friend Missy (Nafessa Williams). Some help but others turn away as she runs for her life since being blamed for executing Zero and two others in that warehouse. West is faced with trusting very few as she fights for the opportunity to expose the truth and save her life before it’s too late.

I really enjoyed the film which involves a young rookie cop on the run for her life which kept the excitement going throughout the story. I thought it was well directed and written but I somewhat question if the characters and the way they are used in the story might send out the wrong message. We have prejudice in this world on both sides of the black and white communities but when the director uses all white bad cops except for one not so intelligent black cop I wonder if his film will stir up too many emotions between black and white. When leaving the theater I got my answer and it did. Sad to say with so much ugliness going on with Trump in office we surely don’t need more of it on the big screen. People are people whether their skin is white, black or some other color so we need to wake up and respect each other and I hope this movie doesn’t stop people from doing so. The claps and cheers when people are killed are a bit disheartening in this violent film.

As for the actors Harris is perfection as she struggles to survive and keep her ethics alive as well. Scott comes and goes but his ending makes up for his misguided earlier journey. Colter is great but tends to react too quickly without analyzing all the facts. Malone, Gibson, Williams and Black are all great supports to the main characters and all the other extras and all help make this story believable but frightening. No animals were used in this film.

More in this category: « Lucy in the Sky The Current War: Director's Cut »
back to top

We have 567 guests and no members online