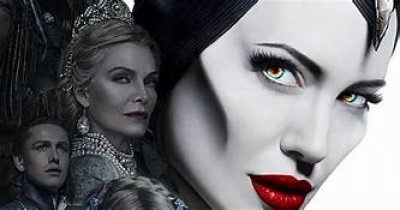 When three thieves in the night enter the moors run by the Queen of the Forest, Aurora (Elle Fanning) only one makes it out alive. For some reason thieves are trying to capture some of the beauties of the forest where they take them to town and sell them to an unknown where they are used for experiments for a possible weapon against Maleficent. Prince Philip (Harris Dickinson), son of King John (Robert Lindsay) and Queen Ingrith (Michelle Pfeiffer) has asked Aurora for her hand in marriage but when Godmother Maleficent (Angelina Jolie) finds out she is none too happy because she does not trust humans.

Will Maleficent learn to love who Aurora loves? Well she tries but not everything turns out too well. After accepting dinner plans at the palace things do not quite go as planned as the Queen has secret motives, Maleficent loses her cool and the royal cat has taken a liking to Diaval (Sam Riley). Yet when Maleficent leaves and gets shot in flight she is soon rescued by a man of mystery, Conall (Chiwetel Ejiofor) and what she experiences changes her outlook on life.

Later in a war between kingdoms, the thought of peace has dwindled from the heads of those that cared leaving Conall to once again become the protector of Maleficent. But when the truth comes out about the Royal family and that of Maleficent and her newly found friends stuck in the middle of it all is Aurora and Prince Philip who are faced with the possibility of making peace.

I absolutely loved this film even more so then the first one. Great direction and writing the story really takes you on a journey of good and evil, love and war with some wonderful cinematography, costumes and score. It kept my attention from beginning to end and helped me to understand Maleficent much more than before. This film is filled with adventure, fantasy, romance and drama and is well worth seeing it in IMAX.

Jolie is true perfection as Maleficent visually and physically. She is spot on with her role as she flies from one destination to another with the huge impressive wings she has on her back. Fanning and Dickinson work well together as they question life, family and the meaning of love. Pfeiffer really knows how to play her part almost like a bi-polar maniac out to destroy the world of good with bad. Riley, Ejiofor, Skein, Lindsay, Gyasi, Temple, Manville and Staunton are great supporting characters that help to move the film from the good to the bad to the good. Overall a wonderful fantastical journey into the world of Maleficent past and present. Loved the cat along with all the creatures of the forest that make you feel a bit like a kid again.

More in this category: « The Lighthouse Lucy in the Sky »
back to top

We have 178 guests and no members online