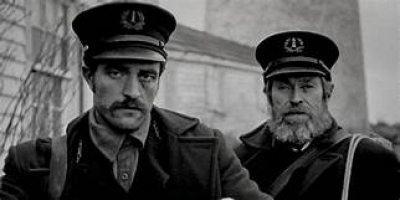 Reviews of movies tend to be subjective and most people will have similar opinions but others may have an opinion much different than some. I cannot say I loved this film but I far from hated it; it just seems that it will find its own audience but probably not many.

Two men in the 1890’s enter a rock, a rock which harbors a lighthouse on it. Thomas Wake (Willem Dafoe) is the boss of the two men and Ephraim Winslow (Robert Pattison) is the timberman now lighthouse keeper under the watchful eyes of Tom. It is day one and the men have four weeks until a boat returns for them. Winslow as he is called, other than Lad, is a quiet man who does what he is told by Tom in order to make his wage. It seems Winslow works like a dog doing all the labor chores and Tom is the keeper of the light and for some reason will not let Winslow near this light by all means.

Weeks go by and the work is still exhausting for Winslow but he knows he will be leaving in due time. Tired and exhausted he becomes delusional about a Mermaid (Valeriia Karaman) that appears every so often to him. Smoking, drinking and masturbating becomes Winslow’s means for dealing with his time on the rock and for putting up with Tom. But when no one shows to pick up the men and time continues to go by both men start to lose their minds causing the audience to wonder if their visions, their actions are real or all made up from the alcohol and the fear of being left there to die. It did not help when Winslow kills a seagull, birds that carry the spirits of lost sea men.

As time continued to grow longer the men began to lose their abilities to decipher right from wrong, good from bad, everything they did was confusing to the audience but when the violence takes over and Winslow decides he wants to see what is truly atop the lighthouse kept secret by Tom he does whatever it takes to find out.

The film is by all means strange with no real cast other than the two men but some people may like it and most will probably not but by all means it is superbly filmed and directed yet even though the dialogue is seldom spoken when it is it comes out very powerful and frightening. A great score, cinematography along with some brilliant acting the film to me has a powerful message. Dafoe is excellent and works so well with Pattison but it is Pattison that steals every scene that he is in making him the focus for Oscar night. What does it take to lose your mind? Well this story may just help you along the journey for your answers! In some very strange way I actually liked it!

More in this category: « The Addams Family Maleficent: Mistress of Evil »
back to top

We have 624 guests and no members online