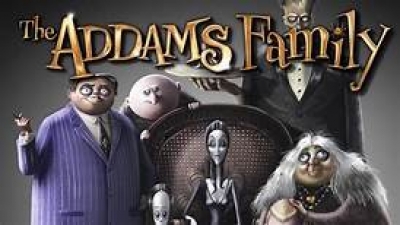 Life for the Addams Family has always been chaotic running from neighborhood people who are out to kill them or at least scare them away. So Gomez Addams (voice of Oscar Isaac) has decided to take his new wife Morticia (voice of Charlize Theron) to a new town where they can hide away from everyone, New Jersey. Upon driving to their new grounds they accidently bumped into Lurch (voice of Conrad Vernon) who has just left a local insane asylum which by coincidence has become the new Addams Family estate surrounded by fog and seen by no one.

Thirteen years later, the house is filled with the stomping of little feet Wednesday (voice of Chloe Grace Moretz) and her little brother Pugsley (voice of Finn Wolfhard) along with their pet cat and Uncle Fester (voice of Nick Kroll). The fog has lifted and now seen down in the valley is the town of Assimilation run by television personality Margaux Needler (voice of Allison Janney) who lives there with her young daughter Parker (voice of Elsie Fisher) and who by the way also holds a wicked secret of her own. The Addams Family decides to take a visit to the town to say hello and try to fit in especially before the rest of the family arrives for Pugsley’s Masurka.   Friendships were not forged immediately and the Addams Family feared if at all possibly leading to pitchforks and fire.

When the relatives started to arrive, Grandma (voice of Bette Midler), It (voice of Snoop Dogg), Grandpa (voice of Martin Short) and Grandma Frump (voice of Catherine O’Hara), and Great Auntie Sloom (voice of Jenifer Lewis) along with many other family members the town became a bit mixed with normal people and that of the oddities. The big question was if the normal families in the valley could survive with the Addams Family atop the hill for years to come? Only time will tell!

If you grew up watching “The Addams Family” then you will definitely recognize so many familiar moments from years past. But if you are not familiar with the live action or previous animated series on this spooky family you will still enjoy the film. Nicely directed and written this film is sure to entertain you but I did not find it as funny as I thought it would be. I really enjoy the musical moments with Lurch and the animation is well done yet not as great as Pixar. As for the voice talent no complaints there it was definitely a well done job by the casting department. Overall a fun film for the entire family sure to be familiar to the older audience and entertaining for the young to enjoy. One animal complaint the Addams Family has several creatures as pets but I’m sure many animal activists will not be too happy with the role of the family kitty.

More in this category: « Joker The Lighthouse »
back to top

We have 552 guests and no members online