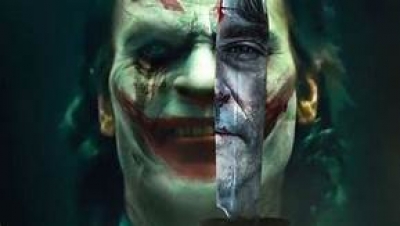 Move over number 1’s at the box office and make room for the new # 1, Joker. Whatever they paid Joaquin Phoenix to star in this film was not enough. At this point I would not be surprised if he did not walk away with an Oscar.

Arthur Fleck (Joaquin Phoenix) did not have a great life living in Gotham with his mother Penny (Frances Conroy). He works as a clown for a local agency alongside a group of other clowns that say they are his friends. But are they? After he gets beaten in an alley by a bunch of juveniles his co-worker, Randall (Glenn Fleshler) gives Arthur a gun for protection. Probably not the best move since Arthur tends to be a little off his wagon. Or is he? The only other guy at work that liked Arthur sincerely was Gary (Leigh Gill) a bit of a small man in size. Arthur would visit his social worker regularly for discussions and his meds that was until local government run by Thomas Wayne (Brett Cullen) cut more funding leaving Arthur without an outlet for his seven different medications.

Arthur had a neurological condition that at times would make him laugh aloud many times disturbing the people around him. But Arthur was tired of feeling bad in a dirty, disgusting city over run by super rats. While at home Arthur and his mother would watch regularly the Murray Franklin (Robert De Niro) Show on the television and hoped one day to be able to perform comedy on his show. Comedy was is outlet but one big problem a comedian needs to be funny and Arthur was not. He met a neighbor in his building Sophie Dumond (Zazie Beetz) who lived with her young daughter but somehow through all the craziness she became a friend to Arthur.

Fired from his day job Arthur had a rough night on the local subway but when the night ended Arthur began to build strength, a power from within that began to change him. Society was already falling apart but for Arthur the stronger he became inside the more he began to feel like a hero standing up for what he thinks is right. After a visit with Mr. Wayne Arthur found out many truths about his childhood and the lies that he lived with all his 30 years of life. As his rage and his strength began to build more and more with each day and each murder, from this point on Arthur lost his identity and found his new one as the Joker. A clown that was building a huge fan base especially after his appearance on the Murray Franklin Show. In the end the Joker was no longer laughing uncontrollably, riots have broken out in the city, the beginning of Batman has taken flight and the birth of the Joker is a reality.

This film is a psychological journey of a man that discovers who he is and who he wants to be. Perfectly directed and written this crazy thriller is a must see film for the big screen. The music, the cinematography, again the writing and direction is superb making it one of the best if not the best movie of the year for me and I’m sure many others. Heck the entire theater clapped at the end which in a scary way appeared that all these people were clapping for a killer, one that stood up for what he thought was right but albeit a stone cold killer. Phoenix is pure perfection from his laugh, dance, character, expressions, makeup, the movement of his eyes to just his entire being. I am sure come Oscar night the focus will be on Phoenix. It was like watching a truly honest insane person that has a point but goes about justify it all in the wrong societal way. De Niro was also brilliant and played his character to perfection. Conroy what can I say I thought she was excellent from her days of “Six Feet Under” and once again she does not disappoint. Beetz, Cullen, Whigham, Camp, Fleshler and Gill are all major players to the story in a supporting role and they all bring their “A” game along with many extras and clowns. This film will make a huge amount of money at the box office and rightfully so. It will also leave you wondering what radicals will think after seeing it. About the only animals shown in this story were the rats that roamed the streets of Gotham plus a certain clown with a big fan base.

More in this category: « Judy The Addams Family »
back to top