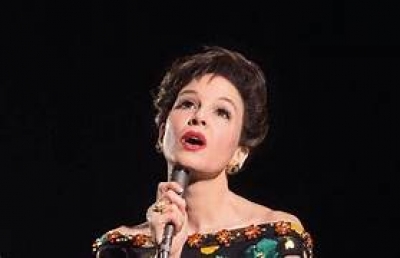 The story opens to a young Judy Garland (Darci Shaw) on the set of “The Wizard of Oz” as she is being told she has that voice. Yet the director and members from the film keep a close eye on Judy making sure she does not eat too much or change her appearance because being Dorothy was the highest honor this young girl could ever have in Hollywood, the pressure was exhausting for Judy in many ways. Flash forward we get to meet her and her two children as they return from a tour in America. Judy was not booking great outlets in America anymore and money was short so she leaned on her ex-husband, the kids father Sid Luft (Rufus Sewell) to have the children stay with him while she goes to London to perform and make money.

Before Judy had left for London she met Mickey Deans (Finn Wittrock) of whom she forged a liking towards. As time went by in London she became friends with her assistant Rosalyn Wilder (Jessie Buckley) and her pianist Burt (Royce Pierreson) but she missed her kids and was very lonely in London. Heck one night she went out after her performance with an older gay couple who she didn’t know but still had a wonderful time with at their home. Not too long after there is a knock on her hotel door and much to her surprise is a familiar face which is later followed by wedding bells. Her life was not perfect and either were several of her stage performances which led to bad press which led to more depression, drinking and drugs. As we know from history six months after London Judy dies at the age of 47.

The director tells the story mostly of Judy’s time in London and the depression she suffered being away from her children and dealing with the press after she would show up on stage smashed from over-drinking and popping drugs. The film showed the struggles that she had and how she internalized the pain trying to alleviate it with vices. The writing is well done but I wish it was a bit more revealing I felt the writing could have been deeper into the life of Judy both young and old. Zellweger is wonderful as Judy especially when her voice, moves and expressions stay true to her character and not her outside self, Renee. When she stayed focus on Judy she was pure brilliance both in appearance and vocals. Honestly there is no one else I wish to mention since Zellweger controlled this entire film. Her supporting characters were a help to move the story along but the focus was all Renee as Judy. I have to mention the two gay characters in the film they stole both of the scenes they were in bringing some sweet levity to a somewhat dark story. I guess I was hoping for a little more of the voice and performance and less of her mistakes and misfortunes. I’m curious to see how this film does beyond the gay community who will most likely go to see it within the first two weeks. No animals were depicted in this film.

More in this category: « Aquarela Joker »
back to top

We have 690 guests and no members online