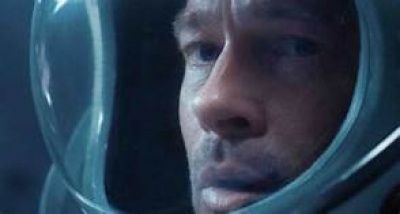 The New future is filled with hope and conflict as we all look to the stars for progress. Astronaut Roy McBride (Brad Pitt) is working on the international space antennae which are filled with other workers and staff when suddenly from outer space comes a huge power surge causing the antennae to explode. As Roy recovers he is later brought into a private top secret session with General Rivas (John Ortiz) and others. Roy has a perfect resume so to speak and has also never had a worrisome health issue. He is asked to fly to the moon then Mars and search for his father Clifford McBride (Tommy Lee Jones) who was originally searching for intelligent life but now is thought dead by many but not quite by the higher ranks since they think he is alive and the cause of the power surges which are threatening life on earth.

Off on a long journey Roy is accompanied by Colonel Pruitt (Donald Sutherland) to the moon which is a base station for flights elsewhere like Mars. But the moon is not the safest place since there are pirates that are after the same resources the others need for survival. Once on his way with other scientists and technicians they receive a mayday signal from an animal research ship but when they decide to help what they find is far from what they expected. Even when Roy lands on Mars what he thought he was going on the mission for turned out not what he planned on and any hopes of finding his father seemed no longer possible. Yet Roy would not stop at the word no but rather found a way to get on the ship to find his father but once again there were complications and when he personally finds Project Lima what is there was not what he wanted to find out and he questions his own life.

The cinematography especially seen in IMAX is breath taking and beautiful making one think we cannot be alone out here and also just how fragile life can be. The story seems drawn out, a bit long with a weak plot with some of the characters being wasted in the film. I wanted more and when you think it is coming it does not. The score is perfect to the story and the scenery makes you feel like you’re in space yourself but overall the film is more boring than exciting and meaningful.

Pitt is superb in this role and for what he is given he plays it exceptionally well not to forget to mention that he still looks flawless. Liv Tyler who plays his ex-wife was a wasted role since she hardly had any screen time and when she did it really wasn’t needed. Jones was definitely looking rough for his role and of course he is a big purpose to the story but he too had wasted time in the film. Sutherland for the life of me I’m not sure why he was even in the movie. The supporting cast in the story all does well with their time on the screen but maybe if they had more to do and more time the film would have been better. There are some animals in the film like a Doberman, German Shepherd, a rat and some monkey’s which brought a little more life to the story than most of the humans. Overall visually the film is a ten and acting as well but story line and direction more of a five.

More in this category: « Official Secrets Aquarela »
back to top