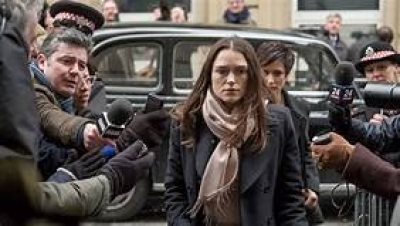 Katharine Gun (Keira Knightley) lives in England and is married to Yasar (Adam Bakri) a muslim immigrant who manages a café. Katharine works at GCHQ deciphering private governmental information that comes across her computer but due to the Official Secrets Act she is held to privacy and can share none of the information with no one but her immediate boss. One day when a document came across her computer that the USA was coercing the UK into a war against Iraq Katharine decided to share the information unanimously with Martin Bright ( Matt Smith) at the London Observer. Once in the hands of the press and to their knowledge authentic they went to press with the story right on the front cover. This sent off red flags to Scotland Yard and the British government causing everyone at the GCHQ to interrogations but against her husband’s wishes Katharine decided to admit it was her.

All Katharine wanted to do was stop a war from happening that the U.K. had no business in being a part of with the U.S.A. ordered by President Bush and Colin Powell. For over a year Katharine was put through hell from authorities in England and also demanded by the American government that she be prosecuted to the full extent for treason among other laws that were broken. Threats, scare tactics and possible deportation of her husband were just a few incidents she and Yasar had to endear because of her sticking up for what she believed in and obtaining lawyers from Liberty legal offices, mainly Ben Emmerson (Ralph Fiennes). In the end, the people were proud of her but the government wanted her locked up yet if you don’t remember what happened back in 2004 with her case in court you might be surprised by what happens! In the Iraq war as most know no weapons of mass destruction were found yet millions of Iraqi’s were killed and wounded and both thousands of British and U.S.A. soldiers also perished in a war that never should have happened.

The film is based on true events and hats off to the producers, director and writers for telling this story exposing the lies that surfaced behind government doors in trying to contain one woman with one cause. As most know it is government that does not tell all because they have the most to lose but thankfully the media is out there to try and expose them for the liars they are. I am personally fighting against a large institution myself and am shocked of what I have learned so far, the lies, deceit and crimes that have been done and the higher authorities that are trying to hide the truth in order to protect not the victims like me but rather the criminals who have obviously done the horrible acts of violence. As for this film there are more valleys than mountains if you know what I mean but there are resemblances that had me outraged yet engaged and the director and writers do a great job on portraying the case against Katharine Gun. If anything I’d say the film could have been about 20 minutes shorter and the end comes to end quite quickly but all in all it is what happened in history. Knightley is superb in this role and truly comes across as if she was the woman herself that went through this hell. Bakri who plays her husband does not have a huge role but it is important to the plot. Fiennes has a small role as well but as usual he is priceless and Smith along with the other supporting characters are all superb. No animals in this film but there is quite a bit of live footage used throughout the story depicting humans acting worse than animals.

More in this category: « The Goldfinch Ad Astra »
back to top