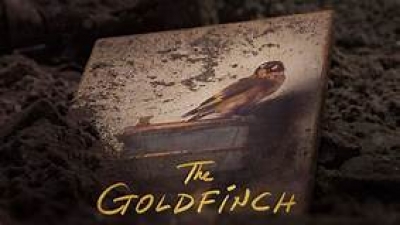 A young Theodore Decker (Oakes Fegley) is at a New York City museum with his mother Audrey (Hailey Wist) admiring a portrait of “The Goldfinch”. At least his mother was but Theo seemed more interested in the young red headed girl named Pippa (Aimee Laurence) who was with Welty (Robert Joy) admiring the same piece of art. Audrey walked away for a few minutes to look at other artwork in the museum but Theo stayed behind then suddenly a massive explosion occurs killing several in the building and one being Theo’s mother. Buried in ash and rubble Theo is alive and laying there covered in ash is the portrait of “The Goldfinch” of which Theo picks it up and places it in his school bag. Stunned and filthy Theo starts to make his way out but first stumbles upon Welty who asks Theo to give a ring he takes from his finger to his partner Hobie (Jeffrey Wright) who runs an antique and restoring business in the city.

From this moment on young Theo’s life has changed forever as he moves in with Mrs. Barbour (Nicole Kidman) and her husband (Boyd Gaines) along with their four young children, young Platt (Jack DiFalco), young Kitsey (Carly Connors), Young Toddy (Collin Shea Schirrmacher) and young Andy (Ryan Foust) who friended Theo more than the other kids but not as much as their mother. Life for Theo looked like it might be ok until his father Larry (Luke Wilson) and his girlfriend Xandra (Sarah Paulson) shows up to take Theo to his new home in Las Vegas. Theo all along taking the portrait wrapped in newspaper with him. Once in Vegas he meets a young Boris (Finn Wolfhard) who he becomes friends with in the land of sand. Smoking, drinking and drugs have entered into the boys lives as both are trying to deal with traumatic events that unfold in Vegas. When Theo leaves Boris and Vegas as a young boy he steals money from Xandra and travels back to New York City still carrying the stolen artwork and shows up on Hobie’s doorstep not alone but with Popper, Xandra’s dog.

Years later a grown man, Theo (Ansel Elgort) still working with Hobie as a dealer and is also still friends with Mrs. Barbour and engaged to her daughter Kitsey (Willa Fitzgerald). What transpires in New York City between Theo and Kitsey, Theo and Hobie, Theo and Pippa (Ashleigh Cummings) and one lost soul now found and in New York, Boris (Aneurin Barnard) everything that Theo thought was real and a sure thing may not quite have appeared that way in reality. Confessions are made, criminal encounters occur, a trip to Amsterdam and a wrong made right all lead to an ending that finally goes right for Theo.

I wonder what the heck happen to the dog as Theo was growing up? The film is a good story but somehow I feel the novel on paperback was much better. The film is way too long, the flashbacks from young to old and vice versa are easy to follow but some are needless. That falls in the lap of the director who should have worked harder on making scenes with some of his supporting characters more realistic. My argument with the writer is that he could have shaved off 45 minutes from this story and then the film would have been much more enjoyable. I yawned way too many times in the theater screening this film. The music and the photography is well done and in all honesty the best part of the film were the lead actors. Elgort and Fegley are both superb as is Wolfhard and Barnard. Kidman is always wonderful in her films but makeup got it all wrong with her face as an older woman. Paulson was great but her partner Wilson at times seemed a bit over-acted. Wright was the type of man you would love to have as a neighbor and as for all the rest of the supporting characters besides the actors playing the criminals they helped to move a very long story along to a final good ending but once again what happed to Popper!

More in this category: « Hustlers Official Secrets »
back to top

We have 339 guests and no members online