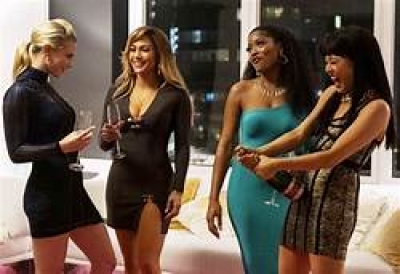 STX Entertainment, Gloria Sanchez Productions and STX Films present an R rated, 109 minute, Comedy, Crime, Drama, inspired by a true story and directed and written by Lorene Scafaria and from the magazine article by Jessica Pressler with a theater release of September 13, 2019.

In 2007 in a New York City strip club money was coming in and going out for the girls that worked there. The biggest money maker that could work a pole better than anyone else in the club was Ramona (Jennifer Lopez).   Flash forward to 2014, Destiny (Constance Wu) was being interviewed by Elizabeth (Julia Stiles) about her life, the clubs, the men and the girls she worked with especially Ramona. There is an abundance of T&A in the clubs along with an abundance of Wall Street business men looking for fun. Destiny was not happy with the money she was making so with some help from Ramona who took her under her wing in a short time Destiny was making better money. The two not only worked together but they played together as well and both having daughters they all formed a bond even Destiny’s grandmother (Wai Ching Ho) who Destiny financially supported.

In 2008 when the markets crashed on Wall Street so did the spending and the strip clubs lost most of their men in turn most of their strippers who had to find other jobs in order to support themselves. It was at this time that Ramona came up with a scheme and with the help of Destiny, Mercedes (Keke Palmer) and Annabelle (Lili Reinhart) the women looked beyond the men’s suits but rather paid attention to the shoes, jewelry and wedding bands picking men up outside the strip clubs, drugging them, transporting them to the strip clubs private rooms and draining their major credit card limits all for sex the men thought they were having with several women. When the business took off so did the need for more women and what better place to find them than Craigslist, not exactly the pick of the litter. Everything seemed to be going well until they scammed Doug (Steven Boyer) stepped in and on May 12, 2013 the women ended up in jail. As for what happened after this you’ll have to see the film but just remember that the whole city of New York is a strip club.

I thought the direction was off quite a bit making little sense at times and scenes were jumping around too much. The writing also done by the director was well done but when placed with the storyline it just gets a bit wasted. I did like the music and the visuals are quite enjoyable especially for the men in the audience but the women will have a moment or two as well. I’m sure many women if they see this film will question the whereabouts of their men more often! Lopez is quite revealing in this film and good for her at her age she looks flawless and does well with her role. The best part of the film though is Wu who steals almost every scene she is in. Palmer and Reinhart are good supporting characters and the other strippers in the story are great for the backdrop. I almost felt for the small scene Cardi B has as Diamond she felt right at home, not a fan of her personally except for some of her music. There is a cameo by a well-known singer but his appearance was worthless other than to show that rich celebrities like strip joints too. There is a cat in the story owned by Annabelle but the Chihuahua owned by one of the newer strippers steals the scenes it is in bringing levity to a mostly dramatic film.  Knock Knock! Who's there?  PETA set to attack furs used in this film.

More in this category: « It Chapter Two The Goldfinch »
back to top

We have 540 guests and no members online