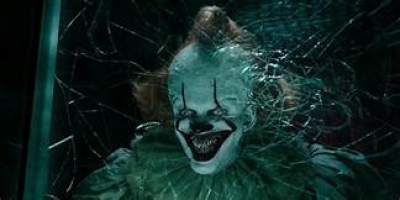 Twenty seven years later, Pennywise has made his return to Derry, preying on the beaten by haters but still alive body of Adrian Mellon (Xavier Dolan) the gay lover of Don Hagarty (Taylor Frey) who were leaving a local carnival. On the side of a bridge Pennywise has left a message, “Come Home” and that they did the members of the “Losers Club”. Mike (Isaiah Mustafa) called the old group of friends to come back to Derry to fight the clown, Beverly (Jessica Chastain), Bill (James McAvoy), Richie (Bill Hader), Ben (Jay Ryan), Eddie (James Ransone) but Stanley (Andy Bean) was not able to return because of the fear he held inside for Pennywise.

As soon as the gang meet and greet each other at the restaurant, Jade of the Orient, the scare tactics by Pennywise start to begin. It was also strange for the group to see each other after twenty seven years, everyone got older and look quite different some more than others. As the adult group wonder around town looking at locations and memories of their past what they all seem to find is bizarre and horrific events. At the same time some children around town are disappearing as the group is also fighting their own fears. Yet Mike believes he knows how to destroy Pennywise but it will take the entire group to participate yet some of them want to leave town. As we live in the moment with the adults we are constantly flashbacked twenty seven years to when they were young in order to fill in some holes. We even find out what happened to young Henry Bowers (Nicholas Hamilton) and the role he plays currently as an adult (Teach Grant) against the group of friends. In the end of good versus evil some die yet some try to turn the light into dark in hopes of killing Pennywise once and for all. Remember when you find someone worth hanging on to never ever let them go!

This film was much better than the first chapter in direction and writing. I liked the use of flashbacks bringing the young kids back into the story to shine light on the issues surrounding them as adults. The use of old time scare tactics works great in this film along with the use of gore and visual mutilation that all together make this film intriguing, suspenseful and scary. There is even some comedy and touches of romance laced within the story that add substance to the plot. I would have enjoyed a bit more scenes with Pennywise and I also found it strange that the town was not in fear that people were gone missing. A great score, a scary clown and moments of horrific deaths all come together to make this horror film worth seeing on the big screen. In the beginning of the film with two gay characters I think the message of hate was loudly used to show exactly what some of the groups of people called different or not normal by some experience in the world every day.

I take my hat off to the casting department for picking out a great line-up of actors both young and old. All of the young actors are stellar but Chastain who I absolutely love as an actress was superb and shows herself as the only mature woman that can handle herself in any situation. McAvoy with his stutter and all is perfection. Hader can bring on the comedy but make it scary as well. Mustafa is the ring leader that brings the group back together thinking he knows the truth in killing Pennywise. Ryan this time around is a stud with a six pack and all, so much for the little fat kid years ago. Ransone is still afraid of his shadow but comes through when in dire need. Bean once again lets the fear get the best of him in a very dramatic scene. Overall this film runs a bit too long in the middle but from the start and in the end brings everything together. As for animals in this film there are a number of scary creatures and one darn adorable Pomeranian that is sure to steal your heart, literally.

More in this category: « Ready or Not Hustlers »
back to top

We have 1260 guests and no members online