Ready or Not Featured 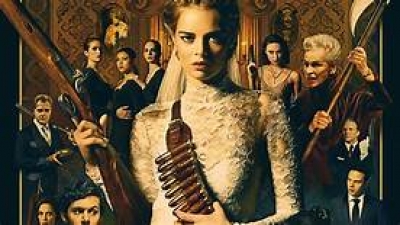 Every woman dreams of having that perfect wedding and during the early part of the day Grace (Samara Weaving) had just that as she was marrying into a very wealthy family to the groom Alex Le Domas (Mark O’Brien). But what happens later is quite unexpected; it seems that the Le Domas family who owns a gaming dominion requires that a new member to the family must play a game in order to be welcomed officially into the family. What Alex did not tell his new wife was that if Grace gets the card marked hide and seek, what happens next according to legend the entire family must kill grace before dawn or else the whole Le Domas family will die.

When Grace overhears a conversation after one of the maids get accidently shot she now knows they are out to kill her. Taking part in the game supplied with weapons the family is on the hunt, Father Tony (Henry Czerny) and his rifle, Mother Becky (Andie MacDowell) with her bow and arrows, daughter Emilie (Melanie Scrofano) with her cocaine and pistol, her husband Fitch (Kristian Bruun) with his cross bow, Aunt Helene (Nicky Guadagni) with her ax type weapon but if looks could kill that is all she’d need, Charity (Elyse Levesque) with her gun, her husband Daniel (Adam Brody) with his rifle and booze and Stevens the driver (John Ralston).   It doesn’t quite seem fair with so many against one but thankfully Alex goes against the family to try and protect Grace.

The night continues on with Grace against the family, she hides wherever possible but fights back when needed. If the family catches her they will conduct their ritual as they hail Satan and honor Mr. LaBelle, the man who gave them their riches and invented the game that they are playing. In the end, we find out if the legend is true or just a made up lie that was last played 30 years ago. There were some barn animals in the film along with a number of animal trophies hanging in the game room.

I absolutely enjoyed this film which is written and direct quite well. I think word of mouth will definitely help this movie at the box office which it should it is really good. If I had one complaint it would be the ending which I personally thought could have been written better than what they gave us but it still is a thrilling film to watch. Weaving kicks butt in this film even while wearing a wedding dress. O’Brien is the struggling husband that must choose between Grace or his family. Brody, Czerny, MacDowell, Bruun, Guadagni, Levesque, Ralston, Talbot, Tsai, and Barbosa all play well together and really bring life into this deadly game of hide and seek but the one that brings some levity is the cocaine sniffing sister Scrofano that lightens up the heavy mood sometimes. Overall if you like this genre of film you will definitely like this film so go see it, it’s worth it.

More in this category: « Good Boys It Chapter Two »
back to top

We have 341 guests and no members online