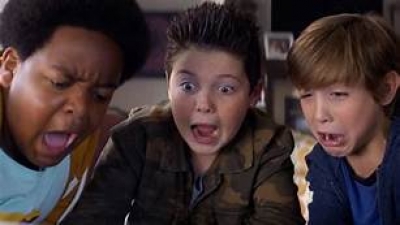 I remember what it was like as a kid having a circle of close friends to ride bikes, go to a movie, hike, play ball and sometimes take that extra step of spin the bottle and experimenting on that first kiss. We were kids and everything was an adventure, new and uncertain. Max (Jacob Tremblay) who has a crush on Brixlee (Millie Davis), Lucas (Keith L. Williams) who can’t keep a secret and Thor (Brady Noon) the boy with the golden voice are sixth grade students that are best friends and go by the name of the ‘Beanbag Boys’. But nothing ever seems to go perfect since the three friends have to contend with the school bullies that are constantly on one of their cases, usually Thor’s, for some issue whether not being able to drink beer or because of his vocal talents.

Max’s father (Will Forte) has to leave town for 2 days and the one thing he stated to Max was not to touch his drone. It is not a toy but rather a tool he uses for work. When the guys get invited to a kissing party at Soren’s (Izaac Wang) they must find a way to learn the precise way to kiss a girl. They try to spy on their neighbor Hannah (Molly Gordon) and her boyfriend Benji (Josh Caras) but the fence is an issue. So Thor and Lucas convince Max to use his father’s drone to spy on the couple by air. Not a good idea since Benji was gone and Hannah and her best friend Lily (Midori Francis) trapped the drone and would not give it back to the boys.

This is where the 3 friends begin to experience an adventure they will never forget. As the threesome try to bargain with the girls, are later on the run from the girls, use sex toys as weapons, make out with a CPR doll who later loses her life, they greet mister pedophile, give drugs to a cop only to later need more drugs, start a war at a frat house, and ultimately take a trip to the North Point Galleria miles away and so much more all in the name of a drone and friendship. In the end, all may not be perfect but they begin to realize that in life growth sometimes requires a bigger shell. You’ll get what I mean when you see the movie and meet Lucas’s parents (Lil Rel Howery & Retta).

The movie is definitely an adventure that has its hysterical moments but maybe my expectations were too high because I liked the story it was funny, dirty, abusive and strange at times but I didn’t think it was as hysterical as I thought it would be. I guess because my childhood wasn’t so hysterical but rather a bit harsh causing me to grow up too fast. Don’t get me wrong there are many moments where you will laugh because of a raunchy prop or a conversation but for me it did not totally hit the mark but rather seemed a bit familiar. I had some difficulty hearing some of the lines from the child actors in the beginning because the sound seemed low but that aside it still had a good storyline well written and directed overall.

Tremblay is a wonderful young actor that plays his part well. Williams adds a lot of levity to his scenes and Noon brings on the drama. Gordon and Francis play well together as partners in crime and the supporting roles all help to bring in laughter and excitement but the winning formula is the innocence of 3 young boys out to discover life as they grow older. No animals surprisingly were used in this film but they were mentioned.

More in this category: « Angel Has Fallen Ready or Not »
back to top