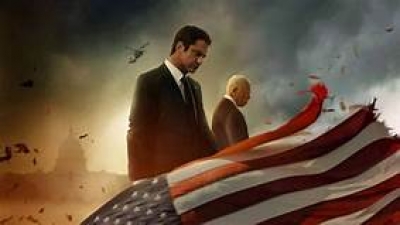 Once again secret service agent Mike Banning finds himself in deeper trouble than usual when unknown assailants kill a number of secret service agents in their attempt to kill President Allan Trumbull (Morgan Freeman). Oddly enough the only agent not to die was Mike who luckily protected the President but what happens next is that all clues behind this attack point to one person, Mike. The President is in a coma and Mike’s wife Lea (Piper Perabo) and child Lynn are at home in disbelief that her husband would ever due such a terrorist act.

With other evidence pointing to involvement from the Kremlin and President Trumbull in a coma, Vice President Kirby (Tim Blake Nelson) is sworn in as President and vows to attack Russia. Meanwhile the FBI (Jada Pinkett Smith) is hot on the trail to capture Mike who happens to be on the run for a crime he did not commit. In an attempt to clear his name and protect President Trumbull Mike is running not only from the secret service, FBI but the one man he thought he could trust who happens to be framing Mike for his own corporate gain. Along the way Mike ends up at his father’s (Nick Nolte) cabin in the woods but when the bad guys come knocking dad has everything covered. Followed by some intense car chases, hand to hand and gun battles Mike’s goal is not only to protect his family but the President and his country as well. In an explosive ending many die but some live but either way the real truth gets revealed.

I absolutely loved this film mainly due to Gerard Butler and the amount of action in the film. Grant it to me the bad guys were quite predictable from the start but it doesn’t matter because the action scenes totally make up for any cliché moments. The battles, chases and explosions are off the radar with a great score to accompany them. I thought the direction was awesome but I just wish the writers were a less obvious of the bad guys. Butler is phenomenal and this sequel is the best of them all. Perabo is not a major focus but brings her scenes home. Freeman what can I say, perfection. Good to see Pinkett Smith does a good job as FBI and overall she looks fantastic. Nolte is superb and Danny Huston is spot on and as for the rest of the supporting cast they were all terrific bringing a must see movie that definitely plays well to the male audience. It would have received 4 paws but I took half a paw for the cliché bad guys written into the film. No pets are featured in this film.

More in this category: « The Peanut Butter Falcon Good Boys »
back to top

We have 272 guests and no members online