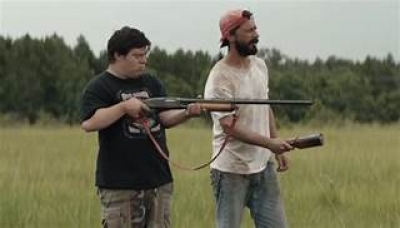 Zak (Zack Gottsagen) is a 22 year old man with Downs Syndrome that currently lives at Britthayven Retirement Home, supervised by his counselor Eleanor (Dakota Johnson) and is consider a risk since he is always trying to escape. Well one night with the help of his good friend Carl (Bruce Dern) Zak finally made it out and was on the run and in nothing but his underwear. His dream has always been to one day wrestle professionally and after watching his hero the Salt Water Redneck (Thomas Haden Church) for ten years on VHS Zak decided to make his way to Aiden, North Carolina to attend wrestling school.

Along Zak’s journey he met up with Tyler (Shia LaBeouf) a 32 year old bad seed that suffers with painful memories of his deceased brother Mark (Jon Bernthal). One may say that’s why Tyler became troublesome making enemies along his way, two in particular, Duncan (John Hawkes) and Ratboy (Yelawolf) who are after Tyler for burning up $12,000 of their crabbing materials.

Tyler and Zak did not meet in the most conventional way but they did seem to work things out in order to hit the trail together, Zak heading to North Carolina and Tyler to Florida. Together they forged an ideal friendship while on their journey together through deltas, drinking home-made whiskey, discussing religion, swimming, catching fish while still on the run, Tyler from the two crabbers and Zak from Eleanor who is out looking for him to bring him back to the home. Yet when Zak and Tyler finally meet up with Eleanor a special bond between the three becomes even stronger than no words can explain. In the end, life has a way of sometimes working its way out, for the good or the bad but either way Zak still got to blow out his birthday candles to a wish that came true.

This is a small film with a big name cast that is sure to warm your heart, make you believe in dreams and feel like you have personally known all three main characters for years. I had the opportunity to chat with the directors Tyler and Michael after the film and these are two down to earth guys that put their heart and soul into this film and it shows. Through the dialogue and the emotions we get to look past a young man with Downs and see him as just another human-being filled with dreams and aspirations, fears and happiness but mostly the will to live life, his life the way he wishes. A great soundtrack and some phenomenal cinematography this story is truly a must see for people of all ages. A sleeper film that will leave you thankful for seeing it and supporting it for the beautiful message it lays throughout its scenes and dialogue.

LaBeouf is back and at 110% perfection. He is so natural in this film that you see beyond his gruff looks and discover the heart that beats to the rhythm of this story. Johnson is charming and calm and looks like she was having the time of her life filming this story and I’m sure her grandmother, my friend, Tippi Hedren was happy she kept her clothes on this time. Gottsagen is a pro making the audience live with every word he speaks and every action he takes. Even though you know he has Downs you tend to look past his handicap and see him as an actor the same as Johnson and LaBeouf. Both LaBeouf and Gottsagen in my opinion should be looked at come Oscar season. Hawkes and Yelawolf play the bad guys well and Church is that guy you want to be able to call friend. Way to go Dern you still have that charm on the big screen. As for the wrestlers that are in the film and the rest of supporting roles they all help to bring this film into a must see category so I hope you’ll step away from the CGI films and give a great film about life a shot. The only animals noticed in this film were crabs, fish, a dog and gators all of which added levity and content to the story line.

More in this category: « Where'd You Go Bernadette Angel Has Fallen »
back to top

We have 383 guests and no members online