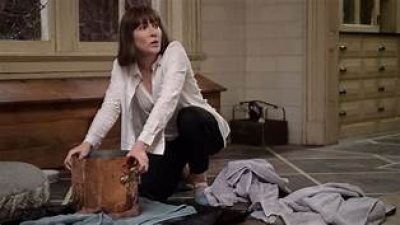 Loved this movie! It's Funny, Smart and an Inspiring Comedy.

Bernadette Fox played by Cate Blanchett is a notorious, eccentric Architect recluse. She is a loving Mom married to an equally brilliant Micro Soft guru Elgen (Billy Crudup) with a 15 year old daughter Bee (Emma Nelson) who finds herself lost in her own self-inflicted world of motherhood and family life, school and neighbor phobia and slowly becoming disconnected from her true self and dreams of who she once was in her intense world as a renowned Architect.

A planned Family vacation to the Antarctica as a reward to Bee for good grades turns from excitement to neuroticism to being believed to be going crazy and nearly institutionalized to an escape and blunders in the Antarctica leading to her finding her next big accomplishment and re-inventing herself and self-worth. The cast is full of stars and cameo appearances that fill the story with grounding the flow of how she came to this point in her life. You'll love the house which is a character in itself and the scenery of the ever changing landscape of Antarctica adventure is beautiful.

Overall this film will inspire you and keep you recognizing that as the story goes "It truly is up to you to make your life dynamic!"

No animals were harmed is this film but you get to experience many from the family dog who keeps getting stuck in odd places in their amazing home to kayaking with Whales and interaction with Seals and varieties of Penguins!