Blinded by the Light Featured 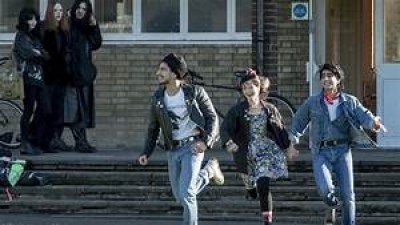 Blinded by the Light

A young Asian boy whose family moved to Luton, England from Pakistan sits atop a hill over-looking the country side with a friend. The year is 1980 and the young boy named Javed religiously writes in his journal with dreams of one day becoming a writer.

Seven years later, Javed (Viveik Kalra) is still writing in his journal filled with life stories, poems and music lyrics that he shares with his good friend and neighbor Matt (Dean-Charles Chapman). When Javed enters into Luton Sixth Form College his biggest thoughts are to make lots of money, kiss a girl and get the hell out of this dump, Luton, a town filled with a number of White Supremists that hate Pakistanis. At school he doesn’t quite have a tribe to belong to, clique that is, but he does friend a young man named Roops (Aaron Phagura) who introduces him to the music of Springsteen. On cassette tape of course! Javed also eventually finds a girlfriend who happens to not be Pakistani and Eliza’s (Nell Williams) parents are not too fond of her boyfriends that never end up white. Yet in English class Javed becomes the center of attention by his teacher Ms. Clay (Hayley Atwell) who happens throughout time to believe in his writings and invests some of her time in helping him achieve his goals.

Back at home Javed lives with his father Malik (Kulvinder Ghir) a man with strong Pakistani values and in control of his home, so he thinks, mother Noor (Meera Ganatra) who helps the family survive after Malik lost his 16 year job at the GM plant, sisters Yasmeen (Tara Divina) who is about to get married to an arranged husband and Shazia (Nikita Mehta) a rebel by daylight a daughter by night. As Javed continues to live his life by the words of Bruce Springsteen’s lyrics which honestly make a lot of sense he begins to anger his father as he lines his bedroom in posters of the “Boss” and continues to write. As times at home get harder since Malik cannot find work Noor must take on more sewing jobs in order to pay some of the bills and with a wedding coming up the parents are worried. But when Javed gets an opportunity to intern at the Herald his opportunities are looking better for a life of writing even though when his article makes front page his father will still not support him for he believes he should be studying economics.

As time continues for Javed he has his ups and downs at home, with his girlfriend, racists and friends but he still kept pursuing his dreams and living by the words of Bruce. He over-rules his father’s voice to take an opportunity to travel to the USA with Roops which terminates his father’s trust and relationship but Javed knows he must live his life and not his father’s. In 1988 back in Luton Javed gives a speech started by paper but ended by the heart and words that will forever ring true for a lifetime to come.

I absolutely loved this film that has a sense of UK rawness to it from the 1980’s right down to a few cliché scenes from some terrific films from back then. The 80’s in my opinion was the best decade ever thanks to music, dreams and the feeling of breathing in a fun and anything is possible life. Yes there were many wrongs some that we are experiencing right now that are filled with hatred and fear but hopefully like in this film sometimes we need to say we’re sorry and sometimes it takes moving into the real world that we will forever share with all types of people from all walks of life. I loved the way the words of Springsteen’s music were displayed in certain scenes and I also like the way people broke into song and dance. I too remember doing this in that decade since so much of music was written about life and love. Great work by the director and writers that took a true life story from the 80’s that rings true today in 2019.

Kalra was a joy to watch as he discovered the true meaning of life, love and family. His parents played by Ghir and Ganatra were real and similar to many other parents at that time. I enjoyed Phagura who brought levity to so many of his moments and Williams who gave us a touch of romance. Divina was not a main focus other than her wedding day and Mehta is the sister everyone would love. I have a sister like that! Atwell is that teacher that all teachers should aspire to be in helping their students grow and follow their hearts. As for the rest of the supporting roles they brought substance, laughter and drama to a very real film about a very real boy looking for that American dream.

More in this category: « Brian Banks Where'd You Go Bernadette »
back to top

We have 680 guests and no members online