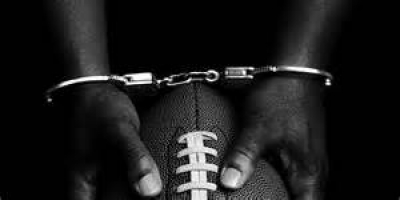 A true story about a young man with inspirational dreams of playing football for the NFL until all his hopes and inspirations came to a halt due to one lie. At age 16 Brian Banks (Aldis Hodge) was all set for a future football career out of high school that is until Kennisha Rice (Xosha Roquemore) lied to authorities that Brian raped her in a school corridor. When the case went to court Brian settles for a plea bargain under the recommendation of his lawyer but instead what the Judge gave him was six years in jail and five years’ probation.

After serving his six years, Brian was trying to get his life back together while living with his mother Leomia (Sherri Shepherd) but when his parole officer informed him he had to wear an ankle bracelet and stay two thousand feet away from parks or schools Brian’s life became much more difficult. His chances of getting back into football were ended and with a record getting any type of job were not easy even when some friends tried to help. I wise man, Mr. Johnson (Morgan Freeman) once told Brian that “all you can control in life is how you respond to life” which were words Brian continued to live by in life. Yet Brian was innocent and he wanted to be free and have his life back so he sought out Justin Brooks (Greg Kinnear) who along with his associates would seek justice for the wrongfully accused in the Innocence Project.

It took time for Justin to take Brian’s case on but he believed in him and after some negotiating Brian got Justin to take his case. They needed hard evidence, something not presented before or the truth from the so called victim but the system and the victim was broken . Brian friended Karina (Melanie Liburd) who had a secret of her own but in time the truths from her and Brian came out to each other. At the age of twenty seven Brian wanted one thing and that was his life back and the Long Beach Superior Court was his chance for that option. It took some pressure, some kindness and some politics for Brian to get his last chance in court under Habeas Corpus and if you followed his story you know what happened but either way you should see this film either way. What happens in Brian’s life after his judgement was truly a response to life.

I really enjoyed this story and the fight from Banks to clear his name and reveal the truth. I was speaking with a friend afterwards and we both loved the film and that it was not a film based on a battle between black and white since sometimes Hollywood although important subject’s causes a stir in life like Trump does every time he opens his mouth. A great score, great writing and direction these films of inspiration are so valuable to society. Kinnear does a nice job as the lawyer that is doing good for the wrongfully imprisoned. It is good news to know a man like Justin Brooks actually exists out there. Shepherd was terrific as the caring mother and Roquemore as the so called victim that everyone loved to hate. Liburd was a good distraction that helped to shed light on some bad situations but it is Hodge that pulls you in and makes you want to help and fight for his rights and the truth that would set him free. No animals are depicted in this film.