Dora and the Lost City of Gold Featured 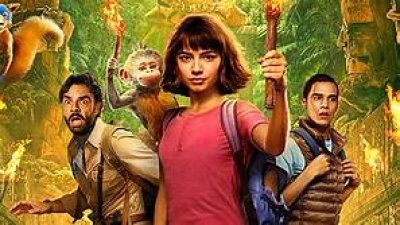 Living in the jungle a young six year Dora and her monkey Boots (voice of Danny Trejo) is spending time with her cousin Diego who is visiting. Her parents Elena (Eva Longoria) and father (Michael Pena) consider themselves explorers and not treasure hunters. Ten years later Dora (Isabela Moner) is older and wiser and knows almost every aspect of jungle life but when her parents explain to her that they are going on an excursion to find Parapata they suggest Dora spend some time in the city with her cousin Diego (Jeff Wahlberg), attend high school and make some new human friends.

High school is tough and kids can be cruel but Dora now nicknamed ‘Dorca’ by other students because she is different has caused a stir and embarrassed Diego. She tried to friend Sammy (Madeleine Madden) who is also not appreciated by others but at school she was not successful except for Randy (Nichols Coombe) who took a liking to her. One afternoon at a school function at the museum Dora, Diego, Sammy and Randy happen to get kidnapped all by mistake except for Dora. When the crate they are in arrives in the jungles they are meet by a Professor of Ancient Languages Alejandro Gutierrez (Eugenio Derbez) who helps them escape from Swiper (voice of Benicio Del Toro) and the rest of the bad guys that are trying to locate Dora’s parents and find Parapata and the city of gold.

When Dora and her friends enter the jungle also looking for her parents the journey and adventures begin for the group of five and Boots too who they happen to meet up with in the jungle. When Dora finds her parents camp so do the Mercenaries, the bad guys, and all are eventually on the path to the Inca gold treasure and the golden monkey. What they find ahead of them is danger and decisions that will decide the future for Dora, her parents and friends and also that of the mercenaries and Dora and the kids thought high school was tough. In the end, friends are made, life lessons are learned and Dora the Explorer will once again have another tale to tell.

I am familiar with Dora but have not watched the cartoon show so I’m sure somethings went over my head but it did not take away the adventure and thrills involved in the journey of Dora and her friends. I guess it’s a little like “Indiana Jones” but on a slightly younger scale. There is Dora talking to the screen but only slightly, turning into animation but again only slightly and having a cast of animal friends familiar to her animated series. My niece who was with me filled me in on something’s since she is a Dora fan. Either way I must say I enjoyed the film quite a bit which will please both young and old audiences.

Moner is perfect as Dora and a great casting job to place her as the main character. Derbez does a nice job with his character but at times I felt his comedic relief was a bit over the top. Wahlberg was slightly stiff at times but he still pulled off his role. Madden was very dramatic and Coombe fun to watch as were so many of the jungle animal friends. Longoria and Pena are not the absolute main focus but I truly enjoyed both of the actors. Along with the actors that play the mercenaries, the additional supporting actors and the additional high school members, this film should do very well among Dora fans and hopefully others since it is fun, colorful, full of adventure and wild creatures and overall a great exploration into the jungles led by a superb group of characters.

More in this category: « The Kitchen Brian Banks »
back to top

We have 410 guests and no members online