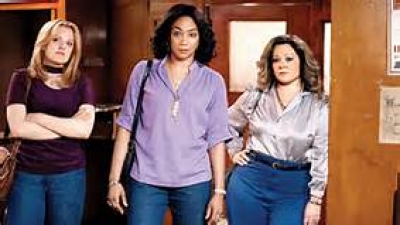 Since the husbands are away Jackie (Myk Watford) along with Kevin’s mother Helen (Margo Martindale) the bitch and I don’t mean female dog, take control of the business in ‘The Kitchen’. The three wives tired of being abused and put down decide to band together and take control of the business especially after Jackie is gone missing. Everything starts to fall into place for the women as they take control of the other men in the mob all followers not leaders and the business of protection for money until things take a wicked turn. Thankfully though Gabriel O’Malley (Domhnall Gleeson) shows up to save the day for the woman especially his love interest, Claire. Gabriel shows the women how to act, handle a gun, carve up a body and release bad news into the river and out to the sea. But they weren’t prepared to take on Alfonso and the Brooklyn Italians when they found out the women were intruding on their territory with the Jews.

In March of 1979, the FBI agents Gary Silvers (Common) and his partner and the Brooklyn mob are both watching every move the women make and news of their husbands getting out of jail early has made the women realize they need and additional plan. More killings persist to make a pathway for the release of the husbands and the news the women will tell them but when the men come home a hit is put on the women and when one of the women ends up dead so do several other players in the business of protection. Times do change, decisions are made and the bottom line in this game of mobsters is survival. Do we have an understanding?

I actually enjoyed this film which centers strongly about women empowerment. Some men may have issues with women in control but I think the fact that they think more with their heads and less with their penis like some men do is a very strong asset. Life was tough for women back then and for the most part they always had to prove themselves capable and most times that did not even matter. But times have changed and more women are taking control but overall they still have struggles in a man’s world. I loved the score and the music, the back drop of NYC, and the entire direction and storyline. It’s a mobster/gangster film where the women take control.

Moss starts off weak in her role but flips it around when she finds Gleeson who becomes her protector and lover. Haddish I love as a comedian but she definitely proves herself as a serious actress too in this role. I’m a big fan of McCarthy who loves to ad-lib in her comedies but she really shows here that comedy is not her only power. Martindale adds some authority by an older woman in a man’s world at least for a while. Common doesn’t have a large part in the film but he always brings his game to the films he is in. Dale, Bobb and James are big supports to the three lead women characters but it is the women that all shine here. The film has a great cast of supporting characters that all make this film in my opinion worth seeing. I loved it but my 26 year niece was a bit bored but then again she did not know the struggle of women then versus now. No animals to talk about in this film.

More in this category: « The Art of Racing in the Rain Dora and the Lost City of Gold »
back to top