The Art of Racing in the Rain Featured 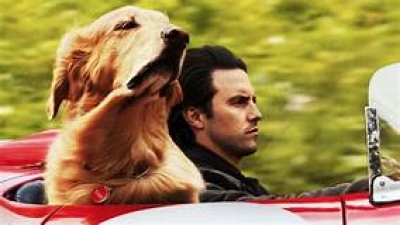 When Denny Swift (Milo Ventimiglia) decided to share is life not only with the world of racing but also a dog he went to a breeder and found the perfect Golden Retriever that seemed to have a soul of a human. It was almost like the puppy picked Denny and those are the best kind, Denny named him Enzo (voice of Kevin Costner). We all know what it’s like to bring home a new pup, potty training, bedtime barks for attention and with Enzo it was also a love of television especially the racing channel. Denny works for Don Kitch Racing Academy as a teacher but also races cars in Seattle, he is known as one of the best drivers in the rain. As for Enzo he grew up at the track watching Denny speed around the course then later Enzo would always show Denny tons of love and attention.

One afternoon at the local grocery store Denny meets Eve (Amanda Seyfried) a pretty woman who teaches English to new residents from other counties. In time Eve and Denny marry and Enzo is the ring bearer at the wedding which takes place at her parents (Martin Donovan & Kathy Baker) enormous home. As life moves forward the young couple move into a new home and Eve announces she is pregnant but Enzo already knew that since he can smell that she is with child. Zoe arrives and Eve who has forged a better bond with Enzo asked him to watch over her and for years he does. Yet when Eve takes ill while Denny is once again out of town racing she leaves the house with Zoe for help forgetting about Enzo who is left for days without food and water. Eve’s parents who Enzo refers to as the ‘twins’ are not happy that Denny seems to be always on the road and with Eve being ill, Enzo turning 10 and Zoe (Ryan Kiera Armstrong) at 7 years old Denny knows he has to make some changes or else Eve’s parents are going to create issues that could separate Zoe from her father.

Yet when Denny is introduced to Luca from Ferrari in Italy things start to become a bit clearer for him about the future. That is until Enzo is struck by a car and Denny is low on money to pay the veterinarian (Karen Holness) for her help but as promised Denny will not give up but instead will continue to fight the negatives and turn them into positives. It is not until Denny takes Enzo for a ride that life changes dramatically. Eight years later in Mugello, Italy life has a way of proving that in death the soul moves on in life once again.

I tried not to give too much away in my synopsis since there are several twists to the story. The story is not actually that long but for some reason it felt long but I still will say I loved it. Who doesn’t love a Golden Retriever and the voice of Kevin Costner who through the mind of a dog takes us through life giving us lessons to live by in our daily lives. If only a dog could talk! I enjoyed the adventure the director shows us even with the use of time lapses as Zoe continues to grow older right down to a teenager (Lily Dodsworth-Evans). As for the writing it is brilliant what Enzo teaches us along this journey. It’s almost like opening up a Chinese fortune cookie every scene giving us good and not hiding us away from the bad moments in life. A great score, a lovable dog, a happy couple and the experience of death takes us on a ride that will touch our hearts.

I loved Costner as Enzo’s voice but even loved more the thoughts that projected from his mind. Ventimiglia does a nice job throughout the film but at times I wanted to feel more emotions from him but in some scenes they did not come. Seyfried was spot on making you feel her pain and the anxiety of life’s hardships. Armstrong was a good cast and worked well with the role she was given as does Donovan and Baker along with several other supporting actors. I believe pet lovers will love this film but be prepared to open up that tissue box you just may need it for more than one reason.

More in this category: « Fast & Furious Presents: Hobbs & Shaw The Kitchen »
back to top

We have 404 guests and no members online