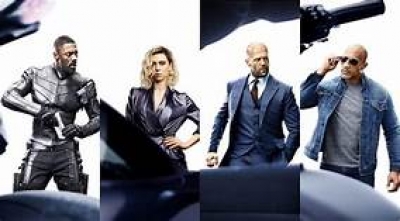 When a group of M16 agents transporting a lethal virus are overrun by a half human half machine ‘cyborg’ named Brixton (Idris Elba) one of the agents named Hattie (Vanessa Kirby) injects herself with the small cylinders full of virus and makes a run for it. Brixton does not have good intentions since working for an unknown person who we only know by a voice. If he gets his hands on the virus known as the CT17 “Snowflake” virus and releases it into society the virus would kill everyone on the planet it comes in contact with.

So the CIA calls in special law enforcement officer Luke Hobbs (Dwayne Johnson) and his outcast unlikely ally Deckard Shaw (Jason Statham). When they come together the last thing they wish to do is work with each other so they kind of go their own way with the same purpose in mind, find Hattie, find the virus and contain it before Brixton gets his hands on it. As both guys hunt for the one woman that could end the world as we know it Brixton is hunting for her as well. Once found by Hobbs she is taken into custody that is until Brixton appears with his men once again causing yet another battle, chase and some team work to bring Hattie back to the good side and the CIA.

Throughout the search Hobbs and Shaw have many words to share, many battles to fight and many wounds to heal but when they finally get Hattie back once again they soon head to Hobbs homeland in Samoa. Trying to heal old wounds with his brother Jonah (Cliff Curtis) and with the help of his mother and friends Hobbs, Shaw and Hattie prepare for war as Jonah tries to rebuild the damaged virus machine to extract the vials from Hattie and store them back into a protected cylinder. Yet not too soon after Brixton shows up with his army and weapons, Hobbs and Shaw have a few tricks up their sleeves that involve old school tactics. Brixton and his gang may believe in machines but Hobbs and his family believes in people and unlike machines they have heart. For Hobbs it’s good to be home with family once again.

I really enjoyed this film which is filled with brilliant CGI and high action events almost from start to finish. The writing is well done with so much humorous banter between the two leads yet I felt that the action over-ruled the dialogue throughout most of the film. The plot was simple but the director made the retrieval of the main objective a bit back and forth hence the reason for such a lengthy film. Thankfully the story had a great cast and a few cameo’s that worked well and added some more humor along the way. Johnson added his usual tough guy mixed with some levity which always works well for him in his roles. His body looks like it was going to burst; he definitely put on a lot more muscle. Statham is definitely a great sidekick for Johnson as they worked well in their love hate relationship to save Kirby who by the way comes with a bit of a secret. Not the secret but a strong warrior bad guy Elba was perfection. The soundtrack sounds awesome and the story and action scenes all work well with this film. One thing though where the Fast & Furious movies before this one have a sense of realism to them but this rendition of Hobbs & Shaw seems a bit unlikely and far-fetched but remembering it is a film for entertainment purposes and a way to escape the reality of our own lives for a bit this film works well and will definitely keep you entertained even though it doesn’t truly have the feel of the Fast & Furious franchise.

More in this category: « The Farewell The Art of Racing in the Rain »
back to top

We have 593 guests and no members online