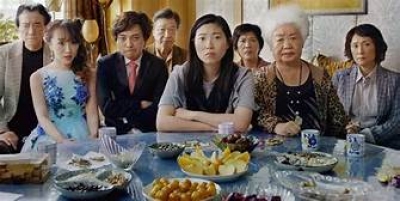 A24, Big Beach Films, Depth of Field and Kindred Spirit present a PG, 100 minute, Comedy, Drama, directed and written by Lulu Wang with a theater release date of July 12, 2019.

Billi (Awkwafina) lives in New York City as a Chinese-American and struggles to get by day to day. One day when she stops by her parents Haiyan (Tzi Ma) and Jian (Diana Lin)home to do laundry and grab some dinner she learns that they are traveling to China to her grandmother Nai Nai’s (Shuzhen Zhao) who unknowing to her is dying from cancer with as little as three months to live. They do not want Billi to come along because the family does not plan on telling Nai Nai about her diagnosis. Instead they plan to hide it from her and as for Billi tagging along she is not good at hiding her emotions or keeping a secret.

So the family plans to create an impromptu wedding between cousin Tony (Gil Perez-Abraham) and his Japanese girlfriend Kathy (Ines Limins) so that the entire family can get together without alarming Nai Nai of her terminal illness. It’s not until Billi makes a surprise visit in China that the family gets worried she may leak the news out to her dying grandmother. Concerned about telling a lie it is explained that in this circumstance it is a good lie. Nai Nai stays busy planning the wedding, entertaining her family and from time to time coughing as if she was experiencing a cold but the family knew worse. The wedding goes on and emotions get high yet the concern still grows that Nai Nai may find out sooner than later about the time she has left. Overall everyone gets to enjoy their time with Nai Nai and is thankful for each and every moment.

I keep thinking I should have loved this film more than I did and I should have been more emotionally attached than I was or wasn’t! It is written well but maybe at times had too many long gaps and short scenes that got lost within all the subtitles. But I will say it does make you think about your own family and if they found out you were dying would they go out of their way to be there? Good question but maybe you don’t want to know the answer since in America and this day and age people seem to be too wrapped up in their own lives and what is only directly in front of them that they tend to forget about the loved ones a distance away. So I truly appreciated the aspect of family depicted in this story and only wished that more people in whatever country would appreciate the importance of family over their own selfish pleasures. So I did get attached to the story but also wish the director took more time to develop some of the other characters which in turn would have given us more reason to care and understand them personally.

Awkwafina known for comedy which I thought this film lacked does a great dramatic turn showing that she can truly own a film beyond laughs. Ma, Lin and all the other supporting characters help to move the story but like I said I wish I learned more about them. Yet the starring role and possible consideration for the little gold man during awards time is Zhao who was brilliant from start to finish and did a great job of making you feel like you were part of her family. As for the animals depicted in the story we experience Ellen the howling fat Chihuahua and a tattered bird that visits Billi in NYC and China. Coincidence I think not! It’s a nice film that helps you understand a little bit more about the Chinese culture and the true love and caring of a close family.

More in this category: « Stuber Fast & Furious Presents: Hobbs & Shaw »
back to top

We have 193 guests and no members online