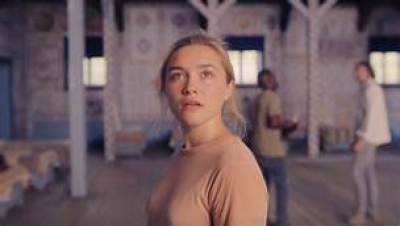 A24, B-Reel Films and Parts and Labor present an R rated, 140 minute, Horror, Thriller, Mystery, Drama, directed and written by Ari Aster with a theater release date of July 3, 2019.

As the story opens Dani Ander (Florence Pugh) is trying to reach her sister Terri (Kaidia Csanyi) who suffers from a bi-polar condition and just recently had a fight with her parents. What Dani soon discovers will haunt her for the rest of her life and not even her longtime boyfriend Christian (Jack Reynor) can absolutely help her deal with the repercussions of what her sister did. The fact that Christian is uncertain that he wants to continue to deal with Dani and her breakdowns surely doesn’t help either. But Christian’s college buddies, Mark (Will Poulter), Josh (William Jackson Harper) and Pelle (Vilhelm Blomgren) have all decided to plan a getaway to Sweden and Christian has asked Dani to come along. Why Sweden? Well Pelle wants to take them to his village where every 90 years the society performs a festival and he wants his friends to be a part of the tradition.

When the five friends arrive they meet Pelle’s brother Ingemar (Hampus Hallberg) who introduces them to Connie (Ellora Torchia) and Simon (Archie Madekwe) an engaged couple who are visiting for the festival from London. Once they all arrive at the village they all soon get to meet the entire group of members of all ages under 72. They are quick to adjust to their new environment especially since they get to enjoy some pretty heavy drugs. The sun never seems to settle and the land has many mysterious landmarks that symbolize their culture and language. Yet in the furthest point of the village sits a yellow triangle shaped barn of which they are told never to enter. When the first official day of the festival begins Mark, Josh, Dani, Christian, Simon and Connie witness a ritual that is extremely disturbing but cultural to their traditions. Personally I was in the same mindset as Connie and Simon and want out but instead what they have received is nothing but a dead end.

As time continues and Josh and Christin decide they both want to do their thesis on the festival it gives them reason to stay but things start to take an even uglier turn as the friends begin to break some rules. Yet as for Christian he has a red-headed admirer, Maja (Isabelle Grill) who intends to mate with him but Dani is beginning to catch on to what is happening overall. As for handicapped Ruben (Levente Puczko-Smith) he plays as to ones after him an important role in maintaining the journals about the family. I’d call it more of a cult! One by one the visitors begin to disappear but when Dani partakes in a competition for May Queen little does she realize what her future holds and that of Christian’s as well. In the end, we get the answers to some open questions, the yellow triangle barn, the bear kept in a cage and the overall end results of the disappearing visitors.

The film is very intriguing and had my stomach in knots in the end because it was so disturbing. I wonder what the real world is like for Ari Aster who directed and wrote this film in a thrilling yet mysterious journey into the unknown. I did find the story to be predictable mostly and about a half hour too long. As for the characters the main actors you find yourself invested in but as for so many of the villagers there was not a lot of character development and at times they all kind of blended together other than when they were all naked some of which was not so pretty. The score is fitting and the photography well done although consistent meaning that it is mostly shot on one location. In the end I found myself intrigued with the story line but not surprised on the end results.

Pugh does a great job in this role from start to finish being co-dependent on her boyfriend in the film Christian played by Reynor who decides to show all as does Grill during the mating scene which lasts quite long. Poulter is a great support as the friend you sometimes want to kick his ass to wake him up to reality. Jackson Harper is a strong character but does the ultimate stupid mistake of going against the rules. Blomgren plays his part well as do the rest of the supporting and demented characters in the story. In the end the story has some resemblance to other films like Hostel with the typical what the heck were you thinking premise that ultimately leads to an unkindly death. The film is worth seeing even if it is way too long but after the first hour it does pick up and will keep your attention.

More in this category: « Spider-Man: Far from Home Stuber »
back to top