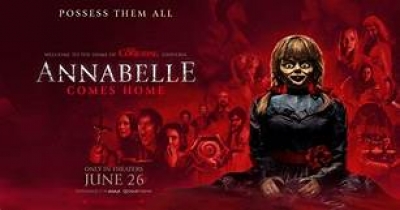 Lorraine (Vera Farmiga) and Ed Warren (Patrick Wilson) are consultants of demonology and witchcraft and are driving home from a long trip to pick up Annabelle the doll and lock her away where she cannot do any harm. So they hope! When their car breaks down in front of Marysville cemetery Lorraine realizes that Annabelle is a beacon for other spirits. When they arrive home they meet up with a priest and encase Annabelle in an old chapel glass cabinet in the Warren room, bless her and contain the evil inside by locking the door.

One year later, their daughter Judy (Mckenna Grace) attends the St. Thomas Catholic School but that does not stop her from seeing dead people. Her parents are leaving for an out of town trip and have asked Mary Ellen (Madison Iseman) to babysit Judy. It also so happens to be Judy’s birthday coming up and her invitations to school friends has gone unanswered mainly due to fear or ignorance. Bob Palmeri (Michael Cimino) happens to live across the street from the Warren home and has a bit of a crush on Mary Ellen but it is her best friend Daniella (Katie Sarife) who happens to be the trouble maker of them all. When she finds out that Mary Ellen is babysitting Judy she wants in also but has a bigger motive for getting into the house other than to help watch Judy and bake her a cake for her birthday.

Daniella is a bit of a snoop and when she finds her way into the private demonic Warren room she not only has to touch everything but also unlocks Annabelle’s cabinet. Oh what a mistake, a big mistake because now it has put Judy, Mary Ellen, Daniella and even Bob in jeopardy of losing their souls. Who’s afraid of the big bad wolf apparently that would be Bob but not the chicken. One thing about the Warren room it is good to know that the evil inside is locked which means there is more good unlocked outside. Is there? Meanwhile while the parents are away Judy and her friends must fight to stay alive but the big question is if it is too late?

The film was dedicated to the memory of Lorraine Warren who happened to die this year. The young actors are the main stars of this prequel/sequel since as for Wilson and Farmiga they don’t have very large parts in this film. It is directed well with many moving shadows, scary creatures, dead people and Satan himself. The writing is simple but works well for the day and age this story took place and also since the scary figures ruled over dialogue. The makeup, score and photography are all perfect to the setting as well with a slow start but a thrilling finish. I can’t quite place it but I felt like something was missing but overall I enjoyed the old school horror versus outright gore and blood. As for Grace, Iseman, Cimino and Sarife they were all brilliant in the way they handled their roles. Albeit in the end it’s a good film to add a little scare into your life at least for over an hour. Being a chicken suburbanite myself I loved that they had them in the film even though one was not so lucky in the end!

More in this category: « Yesterday Spider-Man: Far from Home »
back to top

We have 274 guests and no members online