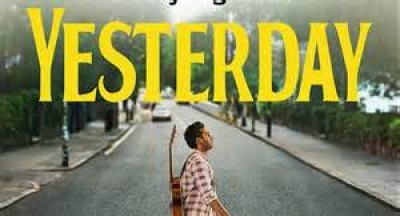 Jack Malik (Himesh Patel) is a want to be famous musician and singer that works part-time at Price Star in his hometown of Suffolk, England. His boss wants him to go full-time or else leave employment in two weeks. His musical career is managed by his friend and local school teacher Ellie Appleton (Lily James) who works hard to book and support his dream. She even got him booked at the famous Latitude Festival but his tent during the occasion resembled his bar performances of very few people in the audience. Yet one night all across the world the lights went out for twelve seconds and as for Jack that’s all it took for him to get hit by a bus and end up in the hospital with some minor ailments and two missing front teeth.

When he got released from the hospital he started to sing a Beatles song, “Yesterday” which his friends and Ellie loved and thought it was Jack’s original. It seems that no one knew who the heck the Beatles were and the music they created. Jack googles the Beatles and nothing came up except for bugs! Sometime later a new song, new teeth and his parents support and a deal with Gavin (Alexander Arnold) the owner of Tracks on the Tracks Recording Studio and Jack was making some noise. Yet it wasn’t until Ed Sheeran showed up at his home after hearing his music and asked him to open for his tour did Jack grow a massive social media following a trip to Los Angles and a new agent Debra Hammer (Kate McKinnon).

Society still had no clue about the Beatles and all the songs that Jack was providing were not his but theirs. Heck the world did not know what Coke, Cigarettes or even Harry Potter were. Strawberry Fields, Penny Lane the hits kept coming as did the public appearances and the fans but something was missing and it wasn’t Rocky (Joel Fry) his touring manager it was Ellie and his true feelings for her. Little did Jack know that a little yellow submarine and an older couple would lead Jack down the right path. When he meets an idol of his at the ripe old age of 78 he discovers that happiness in life is success and that the truth will set you free and after an appearance at the London Wembley Stadium life for Jack for once became normal and happy and all it took was giving a gift for free.

I did like this film a lot mostly because of the great Beatles music so how can you go wrong. The story is well written and has several lessons to learn from but what I thought would be the final end was not what I expected but it did not matter because I liked it anyway. There are some great moments during the story that will leave you laughing but even more so some superb songs that will have you singing.

Patel was brilliant and James is a good romantic supporting character for him of which she is equally as great to watch. His parents is the film Chappell and Bhaskar also bring some comedic relief as does Fry but it is McKinnon that uses her SNL skills to her advantage. Ed Sheeran plays himself and although a bit flat that seems to be his personality so it works. Overall a fun film with superb music and a good cast all makes for a worthy two hours on the big screen.

More in this category: « Toy Story 4 Annabelle Comes Home »
back to top