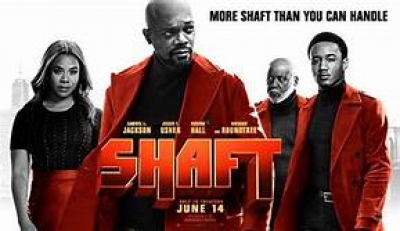 The story begins in Harlem, 1989; John Shaft II (Samuel L. Jackson) is sitting in a parked car with the mother (Regina Hall) of his baby boy John Jr. But when a gun battle breaks out and Shaft’s family is in jeopardy Shaft does what he does best, annihilates the bad guys or so he thought! Later the couple decides that baby John Jr. cannot grow up in Shaft’s world so they split and his mother raises the child. Years later Shaft opened his own investigation office and every year as John Jr. was growing up he never forgot the holidays with some bizarre and off the wall gifts for the boy.

Present day John Jr. (Jessie T. Usher) is all grown up, graduated from MIT and now working with the FBI at their headquarters in NYC as a cyber security expert. It’s not until his best friend Karim (Avan Jogia) who was walking a clean path and working with a military organization of Brothers Watching Brothers showed up dead that John Jr. and his other friend Sasha (Alexandra Shipp) became suspicious of foul play. Yet when John Jr. dressed in his Gap clothing hits the streets of Harlem he realizes he needs help and not from the FBI but rather the man he hasn’t seen in 25 years, his father Shaft II. After a reunion and some on the street firsthand look at how dad operates John Jr. and his father are on the case although not known to John Jr. his father has another motive behind this case. In a journey to find the truth of Karim, father and son, Shaft II & III begin to bond and start to realize their not as different from each as some may think.

In a battle to the end Shaft realizes he needs some supplies so who better to visit and take advantage of his gun room, John Shaft I (Richard Roundtree) John Jr’s grandfather. Time is of the essence since the bad guys took Sasha captive and John Jr. needs desperately to save his friend while Shaft II is excited about meeting an old friend, Gordito (Isaach De Bankole), who he has a long time bone to pick with. As for Grandpa he is along for the ride and ready to take down any bad guy that gets in his way. In the end, John Jr. is tired of working for the man and everyone should know his name is Shaft, John Shaft. Kind of shaken but not stirred!

I used to watch the show when I was young and it was a pleasure to watch it on the big screen with three generations of Shaft. The writing is spot on; the direction is perfect and the music and photography superb. I couldn’t imagine a better casting for Shaft then Jackson with his cool, suave, reckless but with meaning attitude he projects into this character. Great to see Roundtree who equally brings life and excitement to the story that he is so familiar with from his past. As for Usher we watch him grow up and mold into his character so I believe we will be seeing more of him when the sequel comes out. I am a fan of Hall and she does not disappoint even though she is not used a lot she brings levity to all her scenes. Shipp and Jogia of course add to the plot as well as Bankole and so many other supporting characters in this well done story. No animals depicted except the human kind good guys versus the bad guys fight for answers and justice on the streets of New York.