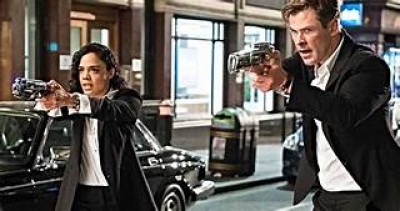 Movie review written by Jon Patch with 2.5 out 4 paws

In Paris, 2016, Agent H (Chris Hemsworth) and his boss High T (Liam Neeson) are out to extinguish the alien organization known as the Hive. Twenty years earlier in Brooklyn a young girl named Molly (Mandeiya Flory) is awaken by some ruckus outside her window and what she sees will imprint her memory forever. That and also the little cute fury alien sitting in her room that she helps to escape the MIB. Twenty years later, Molly (Tessa Thompson) is all grown up and in search of the MIB headquarters. It takes some time but fortunately she finds a way in but gets captured by Agent O (Emma Thompson) and her MIB team. No life, no dog, no cat, Molly pleads to be a part of the MIB organization and after some tests she is recruited on a probationary period.

Now referred to as Agent M, Molly is her name of the past and her first assignment is in London with orientation. In Marrakesh two fierce alien twins (Les Twins) appear in search of a crystal like object and along the way they murder the entire chess game except for Pawny (voice of Kumail Nanjiani) who after losing his queen commits himself to protect Agent M. Back at the headquarters every female is drooling over Agent H and Agent M is the lucky one to work by his side as a backup. Yet at a local club when they meet up with alien Fungus it is Agent M who gains his trust and receives the crystal before the twins get to it first.

Meanwhile Agent C (Rafe Spall) finds out that Agent M has the crystal and shares the information with High T but something went wrong and they discover there is a mole in the MIB organization. A trip back to Marrakesh and Agent M unites with Pawny and the crystal gets stolen. Agents H and M make a trip to an old girlfriends home of Agent H, Riza (Rebecca Ferguson) the merchant of death because he knows if anyone would have the crystal of which they now know what it is capable of Riza would have it. Thanks to an old friend of Agent M’s the universe has a way of making things the way they’re supposed to be. Back in Paris the battle continues at the Eiffel Tower and the truth has surfaced being the right time and the right place for the final battle from the past in the present.

I enjoyed the film for all it has to offer visually but the story line was very predictable and the movie seemed to extend itself longer than it needed to. I get it Hemsworth is a good looking man but once or twice is ok but throughout the whole movie about his face is too much. He tries so hard to be cute and funny but he’s no Will Smith when it comes to MIB. They even threw in a Thor reference during a battle scene that I think most people caught! Like I said the visuals are cool to watch but I also felt like there really wasn’t anything different. They talk about the Hive but it goes without seeing and as for the Twins they ran around like someone just stole their dance moves. The attempts were there but just not totally reached at times in the story. Tessa Thompson does a nice job as the rookie and comes off a bit authentic but she too at times seemed a bit lost in a few scenes. Ferguson was pretty good and did well in her moments as does Emma Thompson although hardly seen and Spall worked well as the guy most people are annoyed with at work. Being a fan of Neeson I felt like his role was somewhat forgetful but Nanjiani the voice of Pawny stole his personal scenes. Overall its worth seeing on the big screen but you better make sure you like Hemsworth he’s all over it. I guess I was just expecting something different than all the others since it was a whole new team but instead it felt ordinary and a bit thrown together. As for animals not sure what most of them were but there are all types of creatures everywhere.

More in this category: « The Secret Life of Pets 2 Shaft »
back to top