The Secret Life of Pets 2 Featured 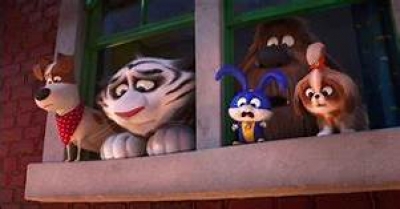 The Secret Life of Pets 2

Everybody loves kids except for Max (voice of Patton Oswalt) but the prospect of a move in is imminent. Katie (voice of Ellie Kemper) one day out and about in NYC stumbles upon the man she is going to marry, Chuck (voice of Pete Holmes). Well as life goes they met they fell in love, they married and had a baby boy named Liam (voice of Henry Lynch). It was hard times in the apartment for Max and Duke (voice of Eric Stonestreet) but once Liam started to get older times got a bit better at home. Max has developed a nervous itch so a trip to the vet and a cone for the head later the family decides to take a road trip to the country and visit a relative’s farm. It is here where Max meets his inner fears with the help of Rooster (voice of Harrison Ford) and life just got a little better.

Meanwhile back in NYC Snowball (voice of Kevin Hart) is back on his super bunny kick and when Daisy (voice of Tiffany Haddish) shows up looking for help Snowball is ready and able. It ends up that Daisy is trying to break out Hu, a white tiger from Sergei’s Circus of Fun (voice of Nick Kroll) who is being tortured to perform. Surrounded by guard wolves and a crazy monkey the task does not seem promising but one never knows what a cute little dog and a hyper bunny can do.

Back at the apartment building in NYC Gidget (voice of Jenny Slate) is taking lessons from Chloe (voice of Lake Bell) on how to become a cat. Why you may ask? Well Max left his pride and joy toy busy bee for her to look after when he left for the country trip but somehow it ends up in the crazy cat ladies apartment surrounded by a world of cats and Gidget needs it back before Max returns. So what’s a better way to fit in then to turn into a cat!

In a train rescue in the end everyone comes together in an effort to save Hu and bring Sergei to his knees. Life is always changing and you always have a choice to run from it or at it.

I seemed to like this story more so than the first one. Part 2 deals with many common practices of owners and their pets which I thought the first film lacked. Circus life, farm life, and city life it is all covered and told in the story with hysterics and mixture of reality. Hosting a pet show for 30 years I can say that the writers finally listened to pet parents and the crazy times we all experience with our furry friends. I did not like the end result for Hu and my dear friend and actress Tippi Hedren who runs Shambala Preserve won’t like the final message either. I know it’s a film and a nicely done animated one at that but it would have been a 4 out of 4 for me if the writers got the final outcome for Hu correct, unless that will be in part 3. A fun movie with a lot going on and very worth the chance to watch on the big screen this version of pet life is fun, dramatic, action-packed and filled with various stories, music and adventures to please all pet lovers.

More in this category: « Late Night Men in Black: International »
back to top

We have 685 guests and no members online