Godzilla: King of the Monsters Featured 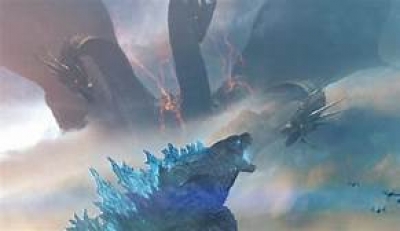 Godzilla: King of the Monsters

Since the 2014 attack in San Francisco, Godzilla has not been seen in five years. Since the death of their son Andrew, Mark Russell (Kyle Chandler) and his wife Dr. Emma Russell (Vera Farmiga) have been separated but their one daughter Madison (Millie Bobby Brown) lives with her mother. There are Titans dormant all over the world and a crypto-zoological agency known as Monarch of which Dr. Emma works for is about to have a birth and Madison has joined her at outpost 61 in China for the occasion. They are harboring a cocoon that is about to open into the first stage of what is yet to evolve again soon thereafter. Emma has created a device called the Orca which by using the right frequency will communicate with the Titan species.

It seems though that someone else is interested in the Orca besides the big monsters and that would be a smaller monster known as Jonah Alan (Charles Dance) who raids the facility with his group pf activist terrorists to capture the Orca and restore the rightful dominance of the Titans which will restore the ecosystem of a dying planet which is being killed by humans. They kidnap Emma and Madison as they take the Orca with plans to release the beasts but first they overtake the Antarctica outpost so as to resurrect the true evil Monster Zero, King Ghidorah, a three-headed dragon. Soon thereafter with the rebirth of Rodan, Mothra, which doesn’t look or sound to intimidating but is and along with others the planet is swiftly being destroyed by the Titans and it seems the only hope for mankind lies in the fate of Godzilla. London, Russia, Arizona, China and Germany the Titans are once again rising and are following the directions of a false king that is controlling everything that the others do.

So Godzilla gets resurrected and we learn more about his habits in this film, Emma is trying to save the world which may be in a different manner than Mark and Madison is just plain confused for a while. But Dr. Ishiro Serizawa (Ken Watanabe), Dr Ilene Chen (Ziyi Zhang), Dr. Rick Stanton (Bradley Whitford), Dr. Vivienne Graham (Sally Hawkins), Colonel Diane Foster (Aisha Kinds) among others with Monarch, in the military and ones considered terrorists are all fighting for what they think is right but in the end we discover who actually was. In a battle to the end at Fenway Park Godzilla takes on one of his biggest nemesis King Ghidorah in hopes of dethroning the three headed beast that apparently has the power to rejuvenate. In the end, long live the king thanks to a few sacrifices made by others who care. Remember to stay until the very end credit you’ll be glad you did!

I must say I went in with low expectations but was pleasantly surprised. The story is wonderfully directed, well written with a number of jokes laced into the dialogue, with a great score and some brilliant special effects. I was equally thankful that you can actually see the creatures, the fights, and hear the dialogue from the actors as well. So many monster movies of this budget try so hard to create amazing battle scenes but they either speed up the fight or shoot it darker I’d say to hid some imperfections but with this Godzilla although somewhat dark at times you can at least see what is going on especially during the battles.

Chandler was pure perfection with some of the best lines and facial expressions of any of the actors. Farmiga plays her character well even when it takes a turn for the worst. I liked Bobby Brown but found myself once or twice thinking why the casting director picked her not because she was bad because she wasn’t but I found myself second guessing a bit. Watanabe is perfect for his role as are all the other actors playing doctors and Dance works well as the villain. A large cast of extras and supporting actors I would really recommend this film if you’re a Godzilla fan because I was pleasantly surprised that I liked it as much as I did. Based on this one I look forward to the next Godzilla to hit the theaters in the near future.

More in this category: « Rocketman Dark Phoenix »
back to top

We have 705 guests and no members online