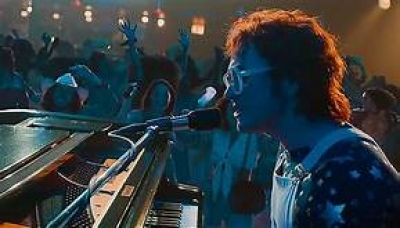 Movie review written by Jon Patch with 3.5 out 4 paws

My name is Elton Hercules John and I’m an alcoholic, prescription drug user, angry, homosexual along with a few other descriptions of himself to a therapy group he is sitting in. As he goes on to talk about himself to the circle of people he starts with his screwed up childhood. He grew up as Reggie Dwight, a young five year old English boy (Matthew Illesley) with an ear for music. So much so, that his mother Sheila (Bryce Dallas Howard) and Ivy (Gemma Jones) started him on piano lessons. His mother was there in body but not so much in mind but she was somewhat supportive unlike his father Stanley (Steven Mackintosh) who was mostly mean and uncaring. When Sheila decided to take up with another man Stanley moved out.

As Reggie grew up a few more years he (Kit Connor) learned of Elvis Presley and Rock & Roll so his mother bought him an album of the King. Time flew by and Reggie was now a man (Taron Egerton) and started touring with The American Soul Tour in 1969. He was advised as a performer that if he wanted to become someone else he needed to kill the person he was born as and he did, he became Elton John. Along with the name change he started to act slightly on his sexuality, confused whether he was gay or straight. He meets Bernie Taupin (Jamie Bell) at this time who becomes his writer and later after living with girlfriend Arabella (Ophelia Lovibond) decides to move out whereas he and Bernie move in with Sheila. They meet up with a management company run by Dick James in England (Stephen Graham) and soon thereafter are off to Hollywood to perform at the Troubadour. It is hear where Elton John wowed the American crowd with his music, costumes and performances and also where he met his new manager and boyfriend John Reid (Richard Madden). Reid was attractive, smart, manipulative and only cared really about himself but at 23 years old Elton wanted to be loved.

The money came rolling in and Elton was a star but soon followed drugs, alcohol, parties and a bastard of a boyfriend. His father had two sons from someone else and Elton finally told his mother he was a homosexual which led her to state he will never be loved properly. Elton in life was falling apart but then he met Kiki Dee (Rachel Muldoon) who he married in hopes of a better life but that was short lived. Bernie leaves for the yellow brick road and at Madison Square Garden so does Elton but his travels led him to rehab. To this day Elton John is sober and still standing.

I was not feeling well while screening this film but I must say it was done well, almost like watching a Broadway musical at times. There is always something going on if not with the dialogue then with an Elton song or dance. I only felt like sometimes the film sped too fast through his hurdles in life identifying them but not really explaining them other than the fact he was crashing. Having success can be difficult and his life like so many artists sheds a light on how easy it is to take the wrong path. Visually the story is amazing filled with an array of costumes and musically well it’s Elton so of course everyone knows and enjoys his many years of work.

Egerton should definitely be hearing his name called during Oscar time with at least a nomination. He really embodies the life of Elton. Bell is the friend that everyone wishes they truly had one that loves and tries to keep his friend on the straight and narrow. Madden you will love to hate since he eventually shows his true colors. Howard is superb as his Jones and Mackintosh plays well as the father you will love to hate especially when a child is trying to look up to him. Illesley and Connor who play the young Reggie characters are wonderful to watch as they shine as much as possible in their short roles. Overall a great story filled with love, hate, tragedy, deceit, sorrow, dance, music and truth along with so many other emotional moments into the life of Elton John.

More in this category: « MA Godzilla: King of the Monsters »
back to top

We have 633 guests and no members online