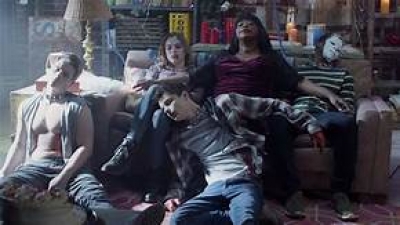 When Maggie (Diana Silvers) moves to a new town with her mother, Erica (Juliette Lewis) she quickly makes friends. Haley (McKaley Miller), Andy (Corey Fogelmanis) Chaz (Gianni Paolo), and Darrell (Dante Brown). Just like regular teenagers, they like to have fun. They go to a gas station where they ask adults to buy them a list of alcohol that they supply the cash for. After several failed attempts Sue Ann (Octavia Spencer) or as they later call her Ma, agrees to get them the alcohol. They soon begin to reach out to her for their alcohol needs when she offers up her basement for them to hangout in. She says she’d feel more comfortable knowing they aren’t driving around. Maggie soon realizes that this seemingly nice lady has other intentions for the kids. She has a nasty revenge plan for their parents whom had bullied her in high school.

This one hour and thirty-nine-minute movie isn’t exactly what I would classify as horror. It’s an hour and fifteen minutes of kids partying. It is very slow the entire movie and has little to no jump scare to it. I found the audience laughing more than cowering in fear. I’m not sure this movie should have hit the big screen. It seems more of a Netflix film to me. I would give this film a one out of four paw rating.

More in this category: « The White Crow Rocketman »
back to top

We have 559 guests and no members online