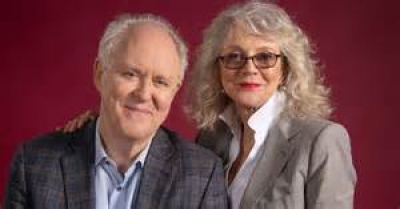 “I just want to be ready” states Ed (John Lithgow) as he references the end is near. Retired, divorced with a son named Brian (Derek Cecil) who is married to Janet (Katie Aselton) with a daughter Jeanine (Sophie Thatcher) and living alone Ed spends much of his time sitting in his underwear in front of the news channel. There are is regular stops at the local grocery store stocking up on canned goods, cleaning products and other nonperishables. Ed believes in having a security blanket, a safety net, a 401 K so to speak just in case America gets invaded by a foreign country. Yet one day was different he notices an older woman Ronnie (Blythe Danner) buying many of the same items as he which of course peeks his interest that maybe she too were a preparer for the worst to come.

Ed’s approach to meeting her is a bit unethical meaning that he seems a bit more like a stalker than a nice guy who is interested in her because she reminds him of him. Ronnie works at a local retail store with Tina (Eve Harlow) who she asks for dating advice as Ed pursues her more and more and their relationship begins to flourish. Ronnie spends more time with Ed out and at his home then hers but one night after meeting his family she invites him into her house and what he witnesses inside is not quite what he thought he’d find. In the end tragedy sometimes brings peace and understanding which could all lead to happiness at least until life as we know it comes to say goodbye.

This is a cute film that will definitely appeal to the older crowd. The direction is well done and the writing a bit simple but the story will definitely have meaning for many as they watch it. Not sure it will do well on the big screen but it surely is a good movie to watch at home with someone you love. Lithgow and Danner are just perfect together as they meet, court and fall in love. Their relationship to each other is magnetic making you want nothing but the best for them both as characters and actors. Overall it’s a sweet film that has a lot of truth to its meaning right up to the bitter ending. As for any animals utilized in the story, Ed is a deer hunter and butchers his own meat, in case you’re a Bambi lover.

More in this category: « Aladdin The White Crow »
back to top