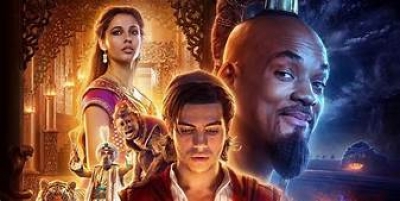 The story begins with a Mariner (Will Smith) telling the story of Aladdin to his two young children as they sail with their mother (Nasim Pedrad) on the ocean blue. As the story begins to unfold we follow Aladdin (Mena Massoud) a thief, street rat as authorities called him as he steals throughout the streets of Agrabah with his monkey friend, Abu. It is on these same streets that he meets a beautiful young woman trying to help some hungry children. Posing as a maiden to the Princess this young woman is actually Princess Jasmine (Naomi Scott) and Aladdin has taken a liking to her as they both flee palace guards.

Back in the palace Jafar (Marwan Kenzari) is planning to over-take the palace and become Sultan in place of Jasmine’s father (Navid Negahban). In order to do so he needs to retrieve the lamp held within the cave of wonders and needs Aladdin to go in for it. If Aladdin retrieves the lamp he will back away from his want to be relationship with Jasmine who is being pursued by other men like Prince Anders (Billy Magnussen). Yet instead of Jafar getting the lamp and due to a mistake by Abu, Aladdin becomes trapped in the cave with a new friend, the magic carpet and of course the lamp. After a few rubs to the lamp blue smoke and a blue Genie (Will Smith) later Aladdin is granted three wishes. Of course the first wish was to get out of the cave and the second was to become a Prince so he can pursue Jasmine. A colorful, dance and song parade later and some very awkward introductions Aladdin meets Jasmine, her father and all the others within the palace including Jafar but because he is a Prince no one recognizes him as the street rat.

A tiger, dolphins, elephants, snakes and a donkey later after a beautiful carpet ride between Aladdin and Jasmine, Jafar once again tries to terminate Aladdin thanks to secrets given by a loud mouth Parrot. Yet when Jafar gains the power of the lamp and has his three wishes he takes over as Sultan but not even that title is large enough for him since he wants to be the most powerful being in the universe and no longer a number two man. A Genie needs a master, and one Genie has never been granted the wish of freedom. In the end love shall prevail and Agrabah is about to get a new Sultan, a married one by the way!

I loved the excitement, the beauty, the songs, especially “Speechless” sang by jasmine in this story. The writing is well done and the direction is good but at times to far-fetched with several sped up frames that were not needed at all but tend to be signature to Guy Ritchie. Sadly they hurt the film more than helped it. As for the romance I would have liked to have seen more between the two leads Jasmine and Aladdin. The chemistry between the two animated characters seemed to click a bit better than the live action. Scott was perfection as Jasmine and her “Frozen” like song ‘Speechless’ was fantastic, she really has the voice and mannerism for the character. As for Massoud the guy can act but he lacked the vocals when it came to song. Not so for Smith I doubted him in the trailers as the Genie but I must say he proved me wrong and did a great job acting and singing as the big blue man. Kenzari was decent as Jafar but I would have rather of seen a bit more of his sinister side like the evil that came out from him in the end. Pedrad, Negahban, Acar and all the supporting and extras in the film which there were many especially in the colorful parade sequence they helped to bring life into the story. I was hoping for a four out of four paws but with a few casting issues and some bad direction choices I had to knock it down to a three out of four. Would I recommend it still? Yes of course its Disney and will definitely put a smile on your face, create a chuckle or two but hopefully it will not make you want your own monkey, tiger or parrot because you thought they were cool in this film.

More in this category: « Booksmart The Tomorrow Man »
back to top