The Sun Is Also a Star Featured 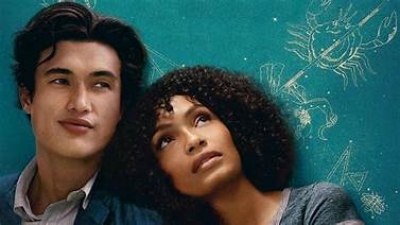 Warner Bros. Pictures, Metro-Goldwyn-Mayer and Alloy Entertainment present a PG-13, 90 minute, Romance, Drama, directed by Ry Russo-Young, screenplay by Tracy Oliver and novel by Nicola Yoon with a theatre release date of May 17, 2019.

Natasha Kingsley (Yara Shahidi) is an immigrant from Jamaica who has been living in New York City for 9 years with her father Samuel (Gbenga Akinnagbe), mother Patricia (Miriam A. Hyman) and her little brother Peter (Jordan Williams). She has never believed in fate or destiny but rather fact and science and is quite aware that her and her family are being deported in less than 24 hours back to Jamaica.

Daniel Bae (Charles Melton) is quite the opposite of Natasha, he believes in fate and destiny and that all things happen for a reason. He is the good son that has done everything his parents Min Soo (Cathy Shim) his mother and Dae Hyun (Keong Sim) his father have always asked of him. Studying to be a doctor Daniel was always the good son versus his brother Charlie (Jake Choi) who always seems to find himself in trouble.

Daniel believes in opening his heart to destiny and when life thrusts Daniel and Natasha together under some spectacular circumstances all he asks of Natasha is the day to make her fall in love with him. He believes in love but Natasha does not so even though she took him up on his experiment she believes nothing will happen especially since he does not know she has to leave America in a day. Since Daniel saved her life from a speeding car she felt she owed it to him to say yes and between an appointment she has with a lawyer and an interview he has about his career they find time to spend quality time together. He is determined to make her fall in love with him and does everything possible to prove that he can. Human beings are like butterflies they flutter for a day and think its forever. Sometimes though in life all we really have is a single day. So does this one day prove Daniels experiment to be true? If it does will a miracle happen so that Natasha can stay in America. One day can seem like 5 years and sometimes 5 years can seem like one day. It all comes down to fate!

I enjoyed this story and the odds of destiny and that things happen for a reason. I too in life think that if things are meant to be than they will be. Grant it life may need a bit of a push sometimes but if it is supposed to happen it will in some form. I thought the direction is good but circumstances throughout sometimes seemed to unreal and that the writing could have been slightly more dramatic and heartfelt. The leads are the entire story and honestly both Shahidi and Melton both do a superb job with the characters and the script they have been given. The score is well suited and the cinematography of the city is wonderful helping to make the story even more interesting. I just felt that the story jumped around a bit and was somewhat rushed and cliché for the most part. Possibly they had a good ending but decided to add on to it for the added romantic climax. Overall a decent film that is good for date night or for women out for a touch of romance and the chance of destiny within their own lives. Thanks to Melton and Shahidi for helping to keep the fantasy of Deus Ex Machina alive!

More in this category: « A Dog's Journey Booksmart »
back to top