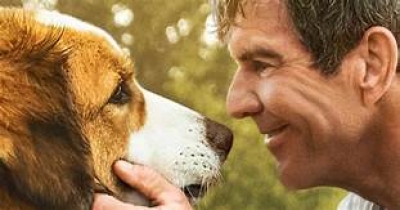 A sequel to “A Dog’s Purpose” this story picks up back at the farm in Michigan with Ethan (Dennis Quaid) his wife Hannah (Marg Helgenberger) and of course Bailey (voice of Josh Gad). There are some new additions Gloria (Betty Gilpin) the mother of Clarity ‘CJ’ June (Abby Ryder Fortson) who happens to be the daughter of Ethan and Hannah’s son who is no longer of the living. Gloria is pretty much one of the worse mothers in the world and every time the grandparents try to help Gloria she hates them more. One day she decides to leave the farm and take CJ with her not even knowing where she is going.

Life on the farm is a lot quieter now that Gloria and CJ are gone and Ethan and Hannah miss their granddaughter more every day. Yet life continues except for Bailey he has grown old and tired and can no longer perform his over the back football trick and Ethan knows it’s time to call in Dr. Deb (Sarah-Jane Marquez-Hicks) to help Bailey fall asleep. Ethan has asked one thing of Bailey, a new purpose, which is to come back and protect CJ and that he does as a female beagle named Molly. Living with her drunken mother that is never home CJ soon meets Trent (Ian Chen) who is adopting one of the last two puppies left in a litter from a neighborhood woman. It is at this same time that Molly who happens to recognize a familiar smell realizes that the little girl in the yard was CJ and trapped in Molly’s body is of course Bailey. It doesn’t take much to convince CJ to take Molly home and with some tough love she convinces Gloria that the dog stays. Many journeys and years later CJ (Kathryn Prescott) grows up as does Trent (Henry Lau) and even though Trent has a crush on CJ she decides to walk on the wild side with a new boyfriend Shane, every parent’s nightmare and for that fact CJ’s as well.

Sometime later Bailey returns as a big dog living at a local Quick Stop store. When an older CJ walks in Big Dog knows it’s her and tries to connect but CJ moves away to the Big Apple trying to kick her singing and song writing career into gear. Small world and some very rough times CJ adopts Max who of course is Bailey on the inside. Max is a cool dog that not only realizes CJ’s boyfriend Barry (Kevin Claydon) is unworthy but also discovers Trent is living in New York as well. A reunited friendship is discovered but when things get rough for Trent his girlfriend Liesl (Daniela Barbosa) leaves him high and dry. Thankfully CJ is there for Trent and Bailey as Max is there for them both.

A road trip to Michigan and a visit with her grandparents CJ begins to realize that Max may actually not be Max but possibly Bailey and with the help of Ethan discovers the truth not only about Bailey but Trent as well. Way to go Boss Dog a job well done bringing the entire family back together again.

I loved this story much more than the first one about Bailey. Even though Bailey is the focus of the canine world the director and writers do a superb job of getting the audience involved deeply with the characters. Quaid and Helgenberger as the loving grandparents, Gilpin as the horrible drunken, never at home mother, Lau as the possible love interest and Prescott as the focal point of the whole story. All the leads are exceptional and the score and cinematography is outstanding but overall thanks to some very special moments on the big screen with some very special dogs you will find yourself laughing and crying in response to a very special dog with a very special purpose.

More in this category: « John Wick: Chapter 3 - Parabellum The Sun Is Also a Star »
back to top

We have 585 guests and no members online