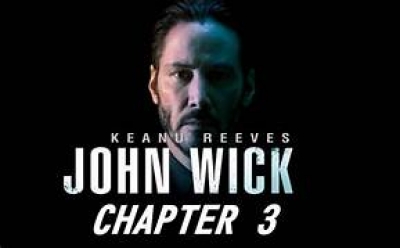 OH...HE'S BACK.....Gold Coins, Blood Markers and Revenge. The fans of John Wick will be enthralled when they see the latest sequel John Wick 3 Parabellum. Directed once again by Chad Stahelski this film is so action packed even more than the first two films that it will keep you on the edge of your seat the entire time.

The Parabellum sequel takes off right from the ending of the night of the last film... John Wick (Keanu Reeves) is on the run after breaking the assassin code by killing someone in the "Continental"(a place of refuge) which is forbidden by assassin protocol. He is "Excommunicate" and has a $14 million dollar bounty on his head and every killer in the world is out to collect it along with ending the life of John Wick "The Man Who Can't be Killed ". It is up to John to once again fight his way out of every hit and to fight his way out of New York.

For those of you who have followed John Wick and know that his revenge is not only for his dead wife but for his beloved Beagle that she bought for him that was killed as well you will be happy to see that the Am Staff who ran by his side in the last film is still alive, healthy running by his side and well taken care of...he too...the dog has a special place of peace at the "Continental". Halle Berry who plays "Sofia" plays the part of an assassin flanked by her two amazing military trained Shepherds. The fight scenes with the dogs are breathtaking and outrageously exciting .Yes ...the good guys even when they are assassins do win and the dogs survive with vigilance! Both Reeves and Berry spent months in intense combat, martial arts and gun training. Reeves performs almost all of his own stunts and battle scenes that will leave you in pain that a human could actually take such torture.

The special effects are outstanding, the fight scenes are too real and this film is sure to please whether you are a Wick fan or a first timer. This Non-Stop, action packed film will leave you gasping for air through every scene feeling each blow including the fatal ones and even those given from the amazing dog characters. Several characters from the last John Wick including Ian McShane as the proprietor of the Continental and Lawrence Fishburne as the Bowery King give amazing even some comical portrayals to the film. Anjelica Houston as the director is an excellent and mysterious new addition. There are no spoilers to this film as it is a must see for the experience into the world of John Wick....

No animals where harmed in this film and the scenes they performed are outstanding including the horse assassin take down.

Another sequel you ask?? Well of course and if it’s anything like this story line it is sure to continue to please. Keanu Reeves is truly the only man for the role of John Wick!

More in this category: « Pokemon Detective Pikachu A Dog's Journey »
back to top

We have 541 guests and no members online