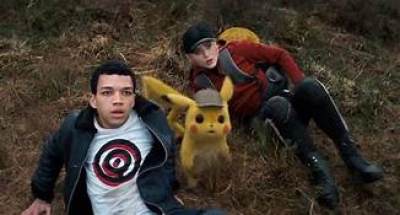 Tim Goodman (Justice Smith) one day while out in the country side with his friend Jack (Karan Soni) receives a phone call that his father Harry who was a detective in Ryme City has died. Ryme city is where the Pokemon live side by side with humans on a daily basis. When Tim is requested by Lieutenant Hide Yoshida (Ken Watanabe) to come into Ryme City to get his father’s personal things a visit to his apartment brings him face to face with Detective Pikachu (voice of Ryan Reynolds). Pikachu apparently was his father’s partner in the city but has no recollection of what happened the night of the car accident and Harry’s untimely death.

At the Pokemon Genetic Research Facility Howard Clifford (Bill Nighy) and his son Roger (Chris Geere) are experimenting on some new ideas with Dr. Ann Laurent (Rita Ora) that could change the world as everyone knows it. Lucy Stevens (Kathryn Newton) a want to be top reporter for CNM is hot on the trail of some possible cover-up situations at that facility and when she meets Tim they decide to work together with her Pokemon duck and Detective Pikachu to find Tim’s father who they believe is still alive and what the scientists are up too. Although uncertain if Harry is dead or alive the search is on in the city of Ryme and with each step Tim and his friends make they find themselves deeper into uncovering the truth behind Harry’s disappearance, what the research facility is really up to and why Tim is the only human that can hear and understand what Pikachu is saying when he talks.

I absolutely enjoyed the film even though I had no idea the stories behind all those Pokémon’s. The film is well directed and written and definitely keeps your attention for almost 2 hours but I’m sure based on the laughs I was missing some meaning behind the world of the Pokemon. The effects are superb with all these creatures roaming around Ryme City with human actors and there are a large number of different creatures to keep you entertained. I just thought if I knew the characters than I probably would have enjoyed several of the scenes more than I did. Pikachu by all means is truly a character you can fall in love with and with Reynolds lending the voice behind the little yellow lightning rod you even fall more in love with his personality.

Smith who I am not familiar with does a great job leading the film with the help of his little buddy Pikachu. Newton is a good partner to him and also a slight romantic distraction. Nighy and Geere are a good contrast to the leads and as for Ora her role is short but effective. Overall the humans do a wonderful job with this film but the true wonders are all the Pokemon characters.

More in this category: « Tolkien John Wick: Chapter 3 - Parabellum »
back to top

We have 557 guests and no members online