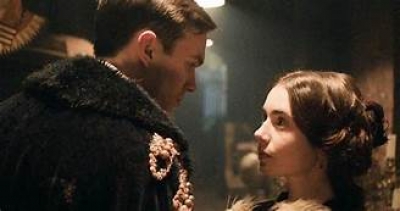 In Somme France during World War I a young man, J.R.R. Tolkien (Nicholas Hoult) lays in the trenches of the war surrounded by dead bodies in hopes of finding his dear friend Geoffrey Bache Smith (Adam Bregman). Flashback to Tolkien’s childhood he grew up in England with his mother Mabel (Laura Donnelly) and his younger brother Christopher (Jack Riley), his father was nowhere to be found. Due to a lack of money and support the family had to move to Birmingham where they received some help from Father Frances Morgan (Colm Meaney). When their mother died of an illness Father Frances Morgan became their legal guardian at which time he had the boys move in with Mrs. Faulkner (Pam Ferris) who fostered them as they grew into young men.

Tolkien forged a unique friendship with three other young men, Robert Gilson (Patrick Gibson), Geoffrey and Christopher Wiseman (Tom Glynn-Carney), they were a club, best friends and brothers. Tolkien was an artist and story-teller who could create and understand different languages, Robert was the Dean’s son, Geoffrey a poet and Christopher a pianist and all four of the men were true friends until the end. Back at the foster home Tolkien has taken a liking to a young woman, Edith Bratt (Lily Collins), she would play piano for the older ladies and one day dreamed of leaving there and playing the music she loved rather than what others wanted to hear. As time went on Tolkien and Edith forged a relationship but as he spent more time with Edith his grades began to decline taking away any hopes of a scholarship so his legal guardian demanded that Tolkien move to Oxford and no longer see Edith.

Tolkien discovered an interest in Professor Wright (Derek Jacobi) as did the professor in him because of his skills with languages and soon Tolkien began to study within his class. War has broken out and the four young men were enlisted to fight. Tolkien has never stopped loving Edith even though she is now promised to another yet life has a way of working things out and as long as Tolkien can stay alive at war he will come back to her. After the war thing were not the same some lived some died but as for Tolkien he went on to be one of the world’s best fantasy writers starting off his writing skills about a man who lived in a hole in the ground known as a Hobbit.

It was great to watch a well done story about one of the world’s greatest fantasy writers. No super-heroes and over-done special effects but rather a great story with a great score, fascinating characters and some superb cinematography all wrapped up to some phenomenal direction and writing. You will find yourself invested in the characters watching them grow up in front of your eyes and taking on adulthood with love and brotherhood in their hearts. A great cast of characters with Hoult leading the way he is flanked by his friends and fellow actors, Gibson, Wiseman and Bregman. Of course there is a romantic interest which happens to be with Collins and the chemistry between Hoult and Collins is magnetic, sometimes child-like but always truthful. Even the moments at war with the character Sam (Craig Roberts) work well within the storyline. A great cast with some wonderful supporting actors and a number of extras brings this story to life on the big screen and gives us a unique look into the life of J.R.R. Tolkien. There are some horses used within the story during the war scenes and one white horse in particular that stands out as beauty amongst death. Overall I really enjoyed this film and hope you will as well should you appreciate a well told biography about a very interesting and unique man.

More in this category: « Hustle Pokemon Detective Pikachu »
back to top