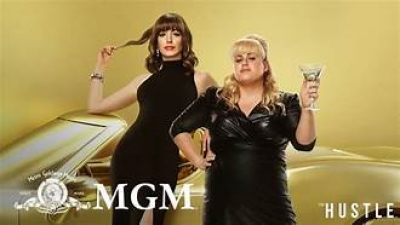 Metro-Goldwyn-Mayer, Camp Sugar and Cave 76 present a PG-13, 94 minute, Comedy, directed by Chris Addison, screenplay by Stanley Shapiro and Paul Henning with a theatre release date of May 10, 2019.

Penny (Rebel Wilson) is a middle class scam artist in the U.S. who usually uses a dating app to find her targets. Josephine (Anne Hathaway) is an upper class international scam artist in the south of France that uses her looks and intelligence to take advantage of some very rich men in the country. It’s not until Penny decides to take a trip overseas and a train ride later that both women cross paths eventually having Penny end up in jail.

Sometime later both Josephine and Penny pull together as a team in order to work over more rich men and it works. At least for a little while! It’s not until several scams later and a break up do both women decide to challenge each other. One week and may the best con win bed time and a scam against Thomas (Alex Sharp) a rich tech giant that just created a successful phone app. Both women end up working off each other as Penny plays a blind woman and Josephine a doctor that could cure her blindness. At this time the antics really kick into high gear and laughs abound throughout the theatre. What happens though in the end is a million dollar lesson that leads to an exotic animal sanctuary and spa and later yet a trip to London and a chance once again to blend in.

I loved this film which is so smartly written and directed. I’m used to Rebel being a bit crazy and over the top but her character in this story is hysterical and she works it so well with the right amount of humor and antics. Hathaway is the perfect straight man or should I say woman to Wilson and she herself is perfection. The two of them remind me of the old Abbott & Costello or Martin and Lewis both very popular male leads in their day. Some great cinematography and a wonderful score all add up to a hysterical and attractive ensemble of characters including Josephine’s use of her partners, the cop and Albert the butler. I absolutely enjoyed every minute of the film and found myself laughing out loud with the audience. Don’t forget to stay until the credits end since there is a funny scene added that was not in the film itself.

More in this category: « Poms Tolkien »
back to top