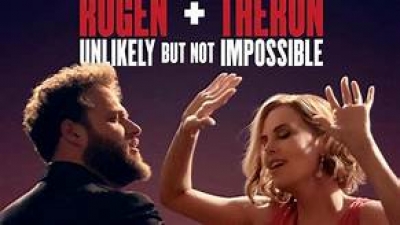 Fred Flarsky (Seth Rogen) is a Jewish journalist for the Brooklyn Advocate and when we first meet him he is undercover at a white power meeting that is until the truth comes out about his background. Wrong place, wrong time, the best alternative for a quick exit is the window. Back in the office his boss (Randall Park) explains to him that Parker Wembley (Andy Serkis) of Wembley Enterprises has just bought the Advocate and Fred refuses to work for him. Next stop for Fred is out of work so his best friend Lance (O’Shea Jackson Jr.) decides to take Fred to a party to meet Boys to Men. While at the party not only does he bump into Wembley but also an old friend from his past, Charlotte Field (Charlize Theron) who now happens to be Secretary of State. They meet and memories are discussed but also a bit of a twinkle in the eye between them both formulates.

Well Fred needs a job and Charlotte needs a script writer not only for her everyday events but also her Global Rehabilitation Initiative and of course her decision to announce her run for President in 2020 since the current President Chambers (Bob Odenkirk) has decided he wants to act in movies since he is already playing a President in a TBS series on television. In a trip around the world to fight for her environmental and animal causes, go Charlotte, she and Fred along with her publicist and assistant Maggie Millikin (June Diane Raphael) and Tom (Ravi Patel) and her security guards are all in for a wide eyed awakening. What Charlotte and Fred later discover that the evil side of politics has eyes everywhere and blackmail among politicians is not a big secret, sometimes. Fred was never up to Charlotte’s stature not even when she babysat him as a 13 year old but sometimes compromise, a good makeover, truth and love can conquer all obstacles that could lead up to a 2020 run for the first female President in America. I’d vote for her!

I actually loved this film it was nicely directed, well written, funny, serious, adventurous, somewhat predictable but overall timely. A great score and soundtrack along with some wonderful cinematography and this film goes a long way. Is it perfect in my mind? No! But a 2 hour film that moves like a 1 hour film to me meant I never became bored with it. The 2020 election is right around the corner and maybe some of the delegates can learn somethings from this story. Let’s hope so anyway but I doubt it especially since the last 3 years have taken its toll on America.

Theron and Rogen seem like the most unlikely couple but in this story it works great. It makes you realize that beauty and love are only in the eyes of the beholder and these two work perfect together. Raphael and Patel are wonderful sidekicks in the story and help to add more substance. Jackson Jr. is not a major part but helps to move the story along. Prime Minister James Steward (Alexander Skarsgard) is a nice wrench in the system as are Serkis and Odenkirk but with the leads and all the supporting and extras that bring this film together I recommend it as a must see and a good lead in to our 2020 election.

More in this category: « Little The Intruder »
back to top