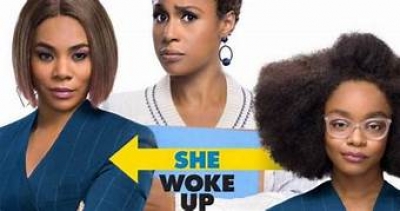 Little Jordan Sanders (Marsai Martin) attended Windsor Middle School in Georgia. It is 1993 and Jordan is 13 years old and not the most popular kid in school of a matter of fact she was constantly bullied. Her parents informed her it would not be like this when she grew up but rather be the boss and control everyone.

Present day, Jordan Sanders (Regina Hall) is running her own company, JSI, with a full staff of employees all of who hate her because she’s so mean. She lives in a beautiful high rise and has an occasional hottie, Trevor (Luke James) who stops by for a little fun but again nothing out of her control. Connor (Mikey Day) is her biggest client in the App business and threatens to leave if she doesn’t come up with something special in 48 hours. Well Jordan did come up with something when she woke up the next morning she was 13 again and she thinks it may be because of the donut truck girl Stevie (Marley Taylor). Her assistant April Williams (Issa Rae) had no idea what was going on but was ecstatic that big Jordan is now a little Jordan. Now who needs who and who exactly is the boss now. Reluctant to do so Jordan knows she needs April’s help so she bends a little but not quite enough.

When Agent Bea (Rachel Dratch) gets word of a kid not in school it does not take long before little Jordan is sent back to Windsor Middle School. What happened to her in 1993 is once again starting all over again right down to sitting in the friend zone at lunch, which are the unpopular kids, Isaac (JD McCrary), Devon (Tucker Meek) and Raina (Thalia Tran). Once again at Windsor it is time for Winchella and talent auditions are starting. The odd kids want in but Jordan recommends otherwise that is until a 13 year old started to think like a 38 year old and it was time to bring it on.

Back at the job April was trying to hold down the fort and even pitch Connor a new concept but when he walked out on her Little Jordan feared the company was lost forever. Three months later an old phrase came true, all it takes is one yes, and life can be everything you ever wanted but maybe not the same as it once was.

I enjoyed this film and laughed a few times. The writers threw in the hot sexy want to be boyfriend and also the handsome Windsor teacher Mr. Marshall (Justin Hartley) along with decisions, decisions and conflict. The direction is well done but I felt many of the scenes could have been a bit funnier. Great music and overall a fun story it will keep your attention and give you a lesson in life as well.

I love Hall and as usual I thought she did a great job with what she had to work with from the writers. Rae I am not familiar with but she truly seems like best friend material. Martin is the mastermind she could have rocked it a bit more but overall she brought her game. Hartley brings some humor, Tone Bell some slight romance and James brought his sexy. McCrary has a great voice, Meek just so darn cute and Tran brings the fun either way along with the supporting actors this film is cute, funny, sometimes dramatic but through it all filled with a life’s lesson to live by.

More in this category: « Shazam! Long Shot »
back to top

We have 891 guests and no members online