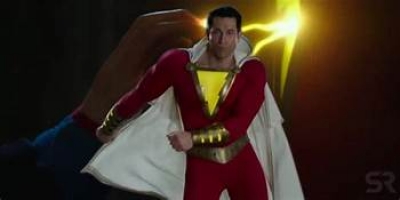 Its Christmas time in Upstate New York, 1974, with snow on the roads while a father and his two sons are on their way to the kids grandfathers house. Dad does not think too fondly of the youngest son in the back seat and when a physical argument broke out between brothers the car spins off the road but not before the boy experiences an odd transportation to another realm where he meets The Wizard Shazam (Djimon Hounsou) who is looking for a pure heart.

Present time in Philadelphia, Billy Batson (Asher Angel) a 14 year old foster child that no one seems to want is on a journey to find his birth mother who he lost at a carnival many years ago. Once again he is being subjected to another foster home run by Victor (Cooper Andrews) and Rosa Vasquez (Marta Milans) along with five foster kids, Freddy (Jack Dylan Grazer), Mary (Grace Fulton), Darla (Faithe Herman), Eugene (Ian Chen) and Pedro (Jovan Armand). Well remember the boy in the back seat of that car back in 1974? He’s back as Dr. Thaddeus Sivana (Mark Strong) and for years he has been searching for The Wizard and he has now found him and in doing so released the 7 deadly sins, ultimately becoming the villain. Sometime later young Billy was summoned by The Wizard and it was he that became the true Champion, also known as a superhero of many names and after getting a little help from Freddy he soon discovered his super powers.

Billy aka Shazam (Zachary Levi) is new to all this superhero stuff but when he gets the hang of it he really goes the mile with his reputation. That is until he meets up with Dr. Thaddeus and his 7 ugly monstrous friends; now this 14 year old foster boy must become a man very quickly as he battles to keep his powers away from Dr. Thaddeus which would give him the ultimate villain powers that could end the earth as its known today. Oh and thankfully during the bus scene Shazam choose to be dog friendly showing once again a boy in a man’s body pure of heart. In a fight to the finish between Shazam and Dr. Thaddeus along with 5 fosters and 7 deadly sins the lair is found and there truly is no place like home. Make sure you wait throughout the entire credits for a few additional surprises.

I absolutely loved this film. It was entertaining, funny, kind of like “Dead Pool”, action packed with a great score and special effects from start to finish. I could watch it again and totally anticipate the sequel. There are great costumes with some wonderful twists and turns in the story and a great ending this film is destined to make a lot of money. The pace of the story is just perfect and the humor throughout is spot on. The ending is also exciting and leaves us looking forward to more to come and hopefully sooner than later. I believe word of mouth will only have more and more people wanting to see this film and rightfully so because it’s that good.

The cast is excellent with Levi showing all sides of his personality. Angel is a great actor to play the 14 year old giving his young and old selves’ lots of power on the screen. His side kick Grazer and he play well off each other perfect in every way. Fulton, Herman, Chen and Armand are all great supporting characters even though one or two of them really don’t say a lot on screen. Hounsou and all the other supporting characters some that we will see much more from in the sequel are all excellent bringing a funny, enthusiastic and visually impressive superhero movie by DC to the big screen. I can’t wait for more from this character and director. Enjoy this film and make sure to pass the word how wonderful it is heck the audience in my theatre screening clapped at the end. Loving what they just got to witness on the big IMAX screen.

More in this category: « Pet Sematary Little »
back to top