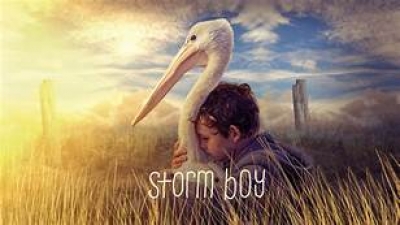 Mike ‘Storm Boy’ Kingley (Geoffrey Rush) is at present time a grandfather and partial owner and board member of a huge company that is run by his son-in-law Malcolm Downer (Erik Thomson) with his daughter Madeline (Morgana Davies) soon to serve on the board with twenty five percent of the company when she turns eighteen. Due to climate change issues Madeline and her father do not see eye to eye when it comes to the company policies and the environment.

Meanwhile Mike begins to confide in Madeline his childhood story as Storm Boy (Finn Little) who left town with his father Tom (Jai Courtney) after an accident that took his mother and sister from their life. Tom took up life in a rundown shack in the dunes on one side surrounded by bay and the other wide ocean. Young Mike grew up alone with his father but never actually felt lonely. Hunters would enter the area at times for duck and geese but many times shot pelicans for the fun of it leaving their dead bodies to rot in the sand. One day while out on his usual adventures Mike met Fingerbone Bill (Trevor Jamieson) and soon a bond was formed. Yet on one afternoon when Mike and Bill stumbled upon some murdered pelicans he found three young chicks in a nest so young that their eyes were not even open. Of course being the caring young man he was he took them home and begged his father to let him raise them. Dad said yes figuring that they would not make it through the night.

Night after night Mike continued to care for the three baby pelicans giving them names but the one that stood out to him the most was Mr. Percival of which a bond formed between the two more so than with the other two pelicans. The story would turn back to present day as Mike continued to tell Madeline his story. Time passed by and the three pelicans have grown and have begun to cause havoc around the house. So Tom informed his son Mike that it may be time to set them free this is something a young boy who raised them from chicks would ever consider but he knew it was right. The story continues with hysterical moments and touching scenes of a father, a boy and his three pelicans.

Life continues to be an ever changing moment in time and Mike is faced with decisions about his life, the pelicans, leaving his father and his friend Bill along with dealing with death. It was said that young Mike never knew what it was like to feel alone but under uncontrollable circumstances Mike discovered this feeling and of course did not like it. In the end, life goes on, sometimes bad and sometimes good decisions are made but no matter what develops it is all part of being alive.

I absolutely enjoyed this film and highly recommend it to families. It is beautifully directed and written but the cinematography along with a gorgeous score help to make you feel like you’re part of the story yourself. The pelicans were absolutely amazing and along with the gorgeous photography and a beautifully narrated story this film is a great option to see with the entire family.

Courtney plays the role of young Mike’s father and although his dialogue is short his expressions of love for his son in this film are not. Rush tells a beautiful story even though in the first 10 minutes I was doubtful of his role but once he gets out of the board room and on to the beach the story takes a turn for the better. Little by the way is awesome and really brings this remake come back to life for another audience in today’s world. Davies has a small role but does a decent job with it and Jamieson is the wise man that everyone needs as a true friend. Overall a nice cast with a beautifully told and acted out story of a young boy and his pelicans. Being a talk host about animals this film was right in my zone and I believe it will be in yours as well.

More in this category: « The Best of Enemies Pet Sematary »
back to top