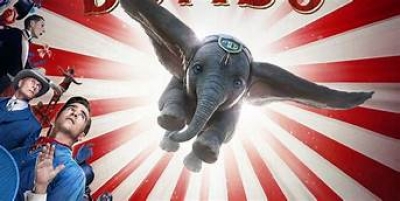 Max Medici (Danny DeVito) is the owner of the Medici Bros. Circus that travels from state to state by train to perform for audiences of all ages. It’s the year 1919 and his circus is getting a bit run down since he is pretty close to broke and even had to sell his horses to get by until he gets a lucky break. Milly Farrier (Nico Parker) and her brother Joe (Finley Hobbins) lost their mother to illness while working at the circus and their father Holt (Colin Farrell) is due back from the war soon. When Holt arrives and the children run to greet him Holt is not all the same that he was when he left the circus as a cowboy rider to fight for our country.

When Holt returns to the circus so much has changed as well and Milly who he thought would take up after her mother’s skills decided she did not want the circus but rather would like to be known in the world for her mind. Max thought one thing that would help his circus was some publicity of a new born Asian elephant but when the blessing arrived so did its ears and Max thought this odd looking creature would be laughed at rather than adored. Circumstances happen and Max decides to keep little Jumbo but sell back his mother to the previous owner. The separation was heartbreaking for Big Jumbo and her baby but that is the way of this cruel world.

When word gets out that this little elephant with the massive ears now known as Dumbo can fly life was looking up for Max and his circus family that is until V.A. Vandevere (Michael Keaton) arrives with his lady Colette Marchant (Eva Green). Vandevere arrives with an offer to make Max and his crew rich by joining his circus acts at his park Dreamland. Yes when they arrive everything looks beautiful but so often behind closed doors are broken promises and lies. Vandevere states he makes the impossible possible but of course all for his own greedy pocket with money loaned to him by J. Griffin Remington (Alan Arkin), the banker.

Yes Dumbo flies with the help from a feather, the kids and their dad. He even ends up working in an act with Colette right after the Pink Elephants act. When Dumbo hears a familiar sound, that being of his mother’s cry he finds himself reunited once again but this time with Vandevere gone mad no one knows if this will be the final time a mother and her son get to unite. In a battle for survival life has a way sometimes of working out and thankfully Max once again goes back to his little circus where no wild animals would be held in captivity. In the end what was once dark is now light and everything is exactly as it should be.

This is a true Tim Burton film with its dark story and sad moments but thankfully there is light at the end of the tunnel. The costumes are brilliant and fitting to the time, the score is fulfilling to every moment bringing a sense of fantasy to your own heart and sadness when needed. Great cinematography and direction along with some wonderful sometimes dark writing all come together to bring the story of Dumbo to life for this generation. If there is one thing I would have liked to see more of was a bit more silliness of Dumbo rather than so much seriousness from the little guy with the huge ears.

Farrell is the misunderstood father that eventually comes back to life. Keaton is the dark side of the story and plays it well. DeVito as always is a character that does a nice job in leading the story line. Green I was a bit uncertain of for the first few seconds but she won me over not only because she ends up actually being a good person but she brings the transition to the story with a sense of beauty and grace. Arkin has a small role but plays it well. Parker and Hobbins especially Parker is the focus of the story along with Dumbo which uses his ears to fly but his expressions to win over your heart. There is a vast array of supporting characters all who play an important part in bringing the Disney animated story of Dumbo to life once again on the big screen. I’m sure all audiences young and old will enjoy this wonderful story of an elephant that can fly, Dumbo. Overall thank you Disney for a beautiful message in the end!

More in this category: « Us The Best of Enemies »
back to top