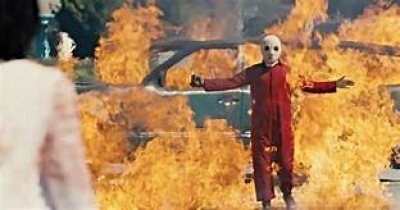 It’s the year 1986 when ‘Hands across America’ was the rage; a young Adelaide Wilson (Madison Curry) is enjoying an evening with her parents at the fair on Santa Cruz beach. She wonders away noticing a man with a sign written “Jeremiah 11:11”. Meaning, ‘Therefore thus saith the Lord, Behold, I will bring evil upon them, which they shall not be able to escape; and though they shall cry unto me, I will not hearken unto them.’ Finding herself alone in the rain she seeks shelter in a fun house called Vision Quest but what she finds in there is not at all what she expected.

Present day, a grownup Adeliade Wilson (Lupita Nyong’o), her husband Gabe (Winston Duke), daughter Zora (Shahadi Wright Joseph) and son Jason (Evan Alex) have come to her deceased mother’s home for a vacation get away. Gabe made plans to hit the Santa Cruz beach with the family to meet friends Kitty Tyler (Elizabeth Moss), her husband Josh (Tim Heidecker) and two daughters Becca (Cali Sheldon) and Lindsey (Noelle Sheldon). The beach is the last place Adelaide wants to go but she does and finds that the funhouse now called ‘Merlin’s Forest’ is still there. When panic occurs on the beach the Wilson’s decide to go home but later that evening they find some strangers standing in their drive way like shadows in a broken light.

Suddenly from this moment on the Wilson’s are fighting for their lives against people with red overalls, one glove and scissors that speak mainly by grunts and broken English and happen to look just like them. In a fight to save their own souls the Wilson’s as well as the world are soon fighting themselves for survival. It is like looking in a mirror as they look, move and react knowing exactly where their look alike are at all times. In the end it is truly a fight where the strong will only survive walking the earth like that of a rabbit released from its cage.

I anticipated this movie for a while and must say my thoughts of it being great were not met. I love horrors and thrillers and I must say this film has several suspenseful moments but there is just so much to deal with even with a small cast. I found the story interesting but broken meaning that to me there are some holes in the story line. The direction is great but I did see a slip up in the editing when a boom appeared in a shot. Not sure if the answers I was looking for where there but rather covered up with a big attempt to throw in some twists which weren’t a huge surprise. The score is great and the idea was there but I just felt it was mediocre.

The cast was superb with Nyong’o leading the pack but if I had to say there was one miscast it would definitely be Duke. His character seemed weak not delivering some of the lines appropriately and maybe that is the fault of the writing throwing in some comedic lines which surely did not work well. I actually couldn’t tell when the audience starting laughing that it was or was not supposed to be funny. The writing seems all over the place but overall the acting is great and you will find yourself sitting on the edge of your seat but overall my expectations were not met and the film to me fell on average. Thankfully since there were so many rabbits in the film they were not used for an aspect of gore but rather intrigue.

More in this category: « Hotel Mumbai Dumbo »
back to top

We have 672 guests and no members online